According to court documents obtained by local blog Jackson Jambalaya, six people in Madison County, Mississippi have been arrested and served indictments for various charges related to voter fraud.

The report said that Canton, Mississippi Alderwoman Vicki McNeil was indicted for two counts of voter fraud. She is the former police chief of the small town. McNeil is a registered Democrat, according to LexisNexis. 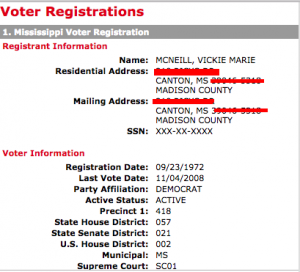 Two non-residents of Canton, Donnell and Jennifer Robinson, were arrested for voting via absentee ballots in the Canton Municipal elections in 2017, though they do not live in the town. Donnell Robinson is also reportedly a convicted felon, and thus ineligible to vote.