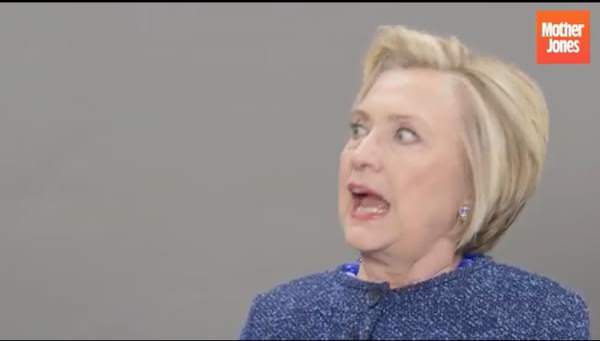 Crooked Hillary Clinton is angry over the possibility of a special counsel investigating her role in the Uranium One scandal.

Ol’ Crooked sat down with Mother Jones for an exclusive interview looking sick and scared as she lashed out at the Trump administration, calling the possible investigation “an abuse of power”.

Former Secretary of State Hillary Clinton has slammed President Donald Trump for suggesting that a special prosecutor investigate her role in the Uranium One deal, a current cause célèbre among conservative commentators and some House Republican lawmakers.

“Taking myself out of it, this is such an abuse of power and it goes right at the rule of law,” Clinton told Mother Jones in an interview posted Wednesday night. “As secretary of state, I went around the world bragging about America’s rule of law. … If they send a signal that we are going to be like some dictatorship, some authoritarian regime where political opponents are going to be unfairly, fraudulently investigated, that rips at the fabric of the contract that we have that we can trust our justice system.”

Classic projection from Hillary. She perfectly described the Mueller investigation. The Mueller witch hunt is something you would see under Stalin’s rule.

Hillary paid millions of dollars for a Russian dossier full of lies which was used to fraudulently unmask and investigate her political opponent.

For Hillary to claim that a special counsel investigating the Uranium One scandal would send a signal to the world that we are a dictatorship is laughable at best. In fact it’s quite the opposite.

If Hillary Clinton isn’t properly investigated and brought to justice then that shows the world, and most importantly Americans that we are no different than corrupt 3rd world countries.