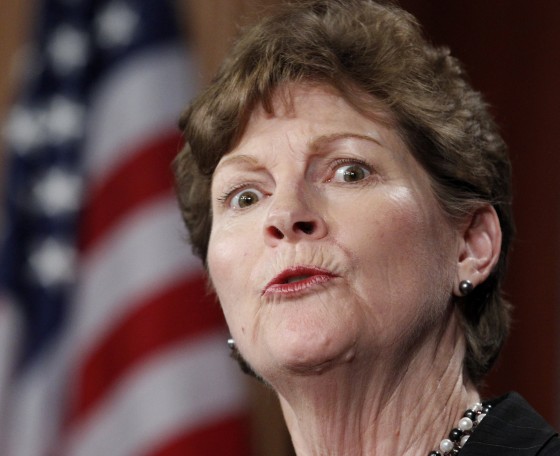 On Tuesday, CNN host Alisyn Camerota asked Senator Jeanne Shaheen (D-NH) a relatively straightforward question: “Why is [Nancy Pelosi], of all people, getting this backlash from DREAMers?” The “backlash” Camerota referred to came on Monday, when House Minority Leader Pelosi was literally surrounded at a community event by illegal immigrant activists who shouted, screamed and heckled her off the stage.

First of all, a clarification: In the CNN clip, Camerota and Shaheen both refer to those protesting Pelosi as DREAMers, however in a longer edit of the original protest video, the activists become extremely irate when Pelosi refers to them as such, and they clarify (in loud, angry voices) that they are not DREAMers, just illegals. They make it clear that anything less than full amnesty for every illegal immigrant in the United States is a failure. Essentially, they’re fanatics; which is why they were protesting someone as left-leaning as Nancy Pelosi.

Senator Shaheen could have easily given this response to Camerota’s question, but instead decided to go down a very different path. When Camerota suggested that the anger may stem from Pelosi’s willingness to work with President Trump on immigration matters, the senator replied with the following bizarre series of non sequiturs:

“Listen, you’ll have to ask them,” she said. “Who knows who’s stirring up this kind of animosity. What we know about the Russians and their interference in the 2016 elections is that they tried to increase divisions within this country. We saw it again in Charlottesville. We don’t know what’s behind this, but what we do know is we need to take action to protect the DREAMers to allow them to stay in America.”

Wow… from Mexico, to Russia, to Charlottesville in under 30 seconds. She’s clearly got the Democrat talking points memorized, now she just needs to figure out how to string them all together in a way that’s more than random anti-Trump gibberish.