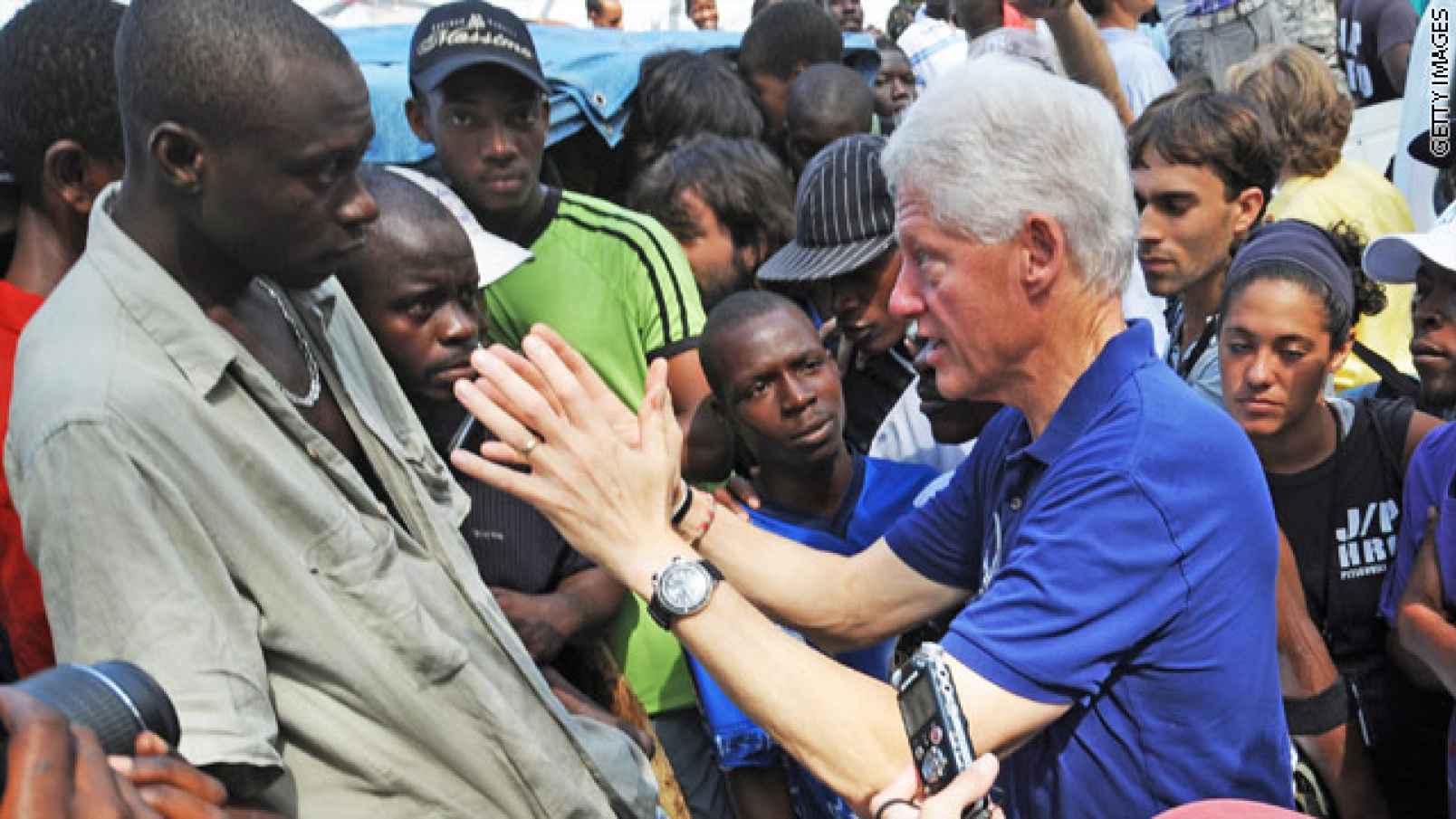 How the Clintons, the UN and Oxfam trashed Haiti.

When an earthquake hit Haiti in ’10, everyone who was anyone in the international community quickly showed up. Bill Clinton had been appointed as the UN Special Envoy for Haiti a year earlier where he had touted the “unique opportunities for public and private investment” in Haiti. The earthquake opened up those opportunities to Clinton Foundation donors.

A year later, Bill Clinton was touting a $45 million new hotel owned by an Irish cell phone tycoon who was a close pal as the only thing a country with a million homeless needed. A CNN puff piece claimed that the hotel would house “aid workers, potential investors and other visitors”. Like Anderson Cooper, who needs someplace to take a hot shower after standing waist deep in water for 5 minutes on camera.

Haiti was a gold mine for the Clintons. Literally. Hillary’s brother was added to the board of a small company that got a gold mining permit at half the standard rates with a 25 year renewal option. Tony, Hillary’s brother, is a college dropout who had worked as a repo man and a prison guard.

The Clintons not only turned a disaster into a slush fund, but even got Hillary’s idiot brother a gig.

Before the UN peacekeeping mission arrived, Haiti was a disaster. After it left, it was a disaster with cholera. The UN peacekeepers brought the disease with them and spread it around, killing 10,000 people and infecting at least 800,000 others. None of them could get into a Clinton luxury hotel.

Before the UN showed up, Haiti had 99,000 problems, but cholera wasn’t one of them. Then UN peacekeepers spread their multinational fecal matter into the Artibonite River. Soon the UN was trying to raise $400 million to clean up the national disaster that it created on top of an existing national disaster. It asked its staff for money and those donations added up to $6K or a week in the Presidential Suite of the Royal Oasis, Haiti’s first 5-star hotel, with financing from the Clinton Bush Haiti Fund.

But say what you will about the Clintons, unlike the UN, they’ve never given anyone cholera. (That we know of.) So far the UN has only come up with a few million. And everyone is demanding that the United States pay for the cholera that the United Nations spread even though we are already a cholera importer, bringing in top grade cholera from Latin American outbreaks to New York, Kansas and Virginia.

But that’s globalization for you. In a flattening world, Nepalese peacekeepers bring an exotic strain of cholera to Haiti. Refugees from Haiti bring it to America. Hillary Clinton’s brother tries to get in on a gold mine. And a horse breeder in Kentucky and a plumber in Michigan have to pay for the UN’s cholera.

But it would be a slow day at the United Nations if all it did was start a cholera epidemic that infected hundreds of thousands of people, lie about it for years, then pretend to take responsibility, refuse to actually pay for it, and then try to blame the whole thing on Trump who had been hosting Season 10 of The Apprentice back then. Unlike the UN, The Apprentice never infected 800,000 people with cholera.

Since it was the UN, it also had to sexually abuse children to give Haiti the full multilateral experience.

“One boy was gang raped in 2011 by peacekeepers who disgustingly filmed it on a cell phone. What do we say to these kids?” UN Ambassador Nikki Haley asked.

Those were the Uruguayans. The Sri Lankans had their own child sex ring of some 134 peacekeepers paying children 75 cents to abuse them and the Nepalese gave most of the country cholera.