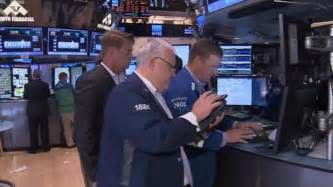 Large-cap technology stocks like Facebook, Amazon, Apple, Netflix and Google-parent Alphabet all traded higher. Last week, valuation concerns sent the overall sector lower by around 0.8 percent. Tech is by far the best-performing sector of the year, rising 17.2 percent in the period.

“I don’t know where the optimism is coming from. That’s not to say we should be negative. I just don’t see any reason for excessive optimism or pessimism right now,” said Randy Frederick, vice president of trading and derivatives at Charles Schwab.

Several tech CEOs, including Amazon’s Jeff Bezos and Apple’s Tim Cook were slated to meet with President Donald Trump as the administration sets its sights on dramatic spending cuts.

“I think there’s a bit of a sense of relief that Macron won the majority,” said Jeremy Klein, chief market strategist at FBN Securities. “Europe had been treading water recently and now it looks like it’s reverting higher.”

There are no major economic data due Monday, but Wall Street paid attention to remarks from a key Federal Reserve official.
Before the bell, New York Fed President Bill Dudley said the central bank inflation should pick up as wages rise along with continuing improvement in the labor market.

Dudley made his remarks less than a week after the Fed raised rates for the second time this year. Investors, however, are skeptical the central bank will be able to further tighten in September. Market expectations for a September rate hike are just 13 percent, according to the CME Group’s FedWatch tool.