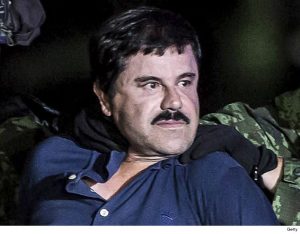 Joaquin Archivaldo Guzman Loera, known by various aliases, including “El Chapo” and “El Rapido,” was convicted today by a federal jury in Brooklyn, New York of being a principal operator of a continuing criminal enterprise – the Mexican organized crime syndicate known as the Sinaloa Cartel – a charge that includes 26 drug-related violations and one murder conspiracy.  Guzman Loera was convicted of all 10 counts of a superseding indictment, including narcotics trafficking, using a firearm in furtherance of his drug crimes and participating in a money laundering conspiracy.  The verdict followed a 12-week trial before U.S. District Judge Brian M. Cogan.  Guzman Loera faces a mandatory sentence of life imprisonment at his sentencing scheduled on June 25.

The Evidence at Trial:

As proven at trial, Guzman Loera was a principal leader of the Sinaloa Cartel, a Mexico-based international drug trafficking organization responsible for importing and distributing vast quantities of cocaine, marijuana, methamphetamine, and heroin into the United States.  The evidence at trial, including testimony from 14 cooperating witnesses; narcotics seizures totaling over 130,000 kilograms of cocaine and heroin; weapons, including AK-47s and a rocket-propelled grenade launcher; ledgers; text messages; videos; photographs and intercepted recordings, detailed the drug trafficking activity of Guzman Loera and his co-conspirators over a 25-year period from January 1989 until December 2014.  Guzman Loera was repeatedly referred to by witnesses as one of the leaders of the Sinaloa Cartel.

Guzman Loera oversaw the smuggling of narcotics to wholesale distributors in Arizona, Atlanta, Chicago, Los Angeles, Miami, New York, and elsewhere.  The billions of illicit dollars generated from drug sales in the United States were then clandestinely transported back to Mexico.  Guzman Loera also used “sicarios,” or hit men, who carried out hundreds of acts of violence in Mexico to enforce Sinaloa’s control of territories and to eliminate those who posed a threat to the Sinaloa Cartel.

In the course of the decades-long drug trafficking conspiracy, the Sinaloa Cartel transported tens of thousands of kilograms of narcotics from Central and South America for distribution in the United States.  Guzman Loera used various methods to transport the cartel’s narcotics into the United States, including submarines, carbon fiber airplanes, trains with secret compartments and transnational underground tunnels.  Multiple witnesses testified about seizures by law enforcement officers of massive amounts of cocaine, heroin, and marijuana linked to the Sinaloa Cartel.  One of the largest seizures of drugs bound for the United States involved over seven tons of cocaine concealed in jalapeño cans.

Guzman Loera also utilized a sophisticated encrypted communications network to operate the global narcotics trafficking operation.  As an information technology engineer testified at trial, Guzman Loera paid him one million dollars to purchase and set up a network to enable the defendant to communicate via the internet with his drug trafficking associates in Colombia, Ecuador, Canada, and the United States without fear of being intercepted by law enforcement or his rivals.  The witness devised a secret and secure system, consisting of encrypted cell phones and encrypted apps.

The success of the Sinaloa Cartel relied upon the use of violence to maintain their power throughout the region and beyond.  Numerous co-conspirators testified that Guzman Loera directed his hitmen to kidnap, interrogate, torture and shoot members of rival drug organizations, at times carrying out acts of violence himself.  A former hitman testified that Guzman Loera beat two men with a tree branch until their bodies “were completely like rag dolls,” before shooting the men and ordering their bodies be tossed into a bonfire.  The former hitman also testified that Guzman Loera interrogated a rival drug cartel member, shot him and ordered that he be buried alive.  In an intercepted call, the jury heard Guzman Loera order one of his sicarios to kidnap rival cartel members, but not to kill them without first checking with him.

The Sinaloa Cartel had unfettered access to weapons.  A law enforcement witness showed the jury over 40 AK-47s that were seized in El Paso, Texas before they could be delivered to Guzman Loera in Mexico.  Additionally, witnesses identified photographs of various weapons, including grenades and a rocket-propelled grenade launcher utilized by the Sinaloa Cartel.  Guzman Loera’s personal arsenal included a gold plated AK-47 and three diamond-encrusted .38 caliber handguns, one emblazoned with his initials, “JGL.”

The evidence presented at trial demonstrated that to further the interests of the Sinaloa Cartel, Guzman Loera and his organization took advantage of a vast network of corrupt government officials.  These officials ranged from local law enforcement officers, prison guards, state officials, high ranking members of the armed forces, as well as politicians.  These corrupt officials assisted Guzman Loera and his organization in exchange for millions of dollars’ worth of bribery payments.  For example, according to the testimony of several witnesses, in many instances, Guzman Loera and his workers were warned of pending law enforcement operations which allowed Guzman Loera to avoid capture on multiple occasions.  In other instances, Guzman Loera, through his employees, paid officials to turn a blind eye to trafficking activities in an effort to facilitate the shipment of drugs, weapons, and bulk cash.

Guzman Loera’s lucrative drug trafficking business generated billions of dollars in illicit proceeds.  Guzman Loera used various methods to launder money including bulk cash smuggling from the United States to Mexico.  One of the largest seizures was of $1.26 million seized from hidden compartments in a truck driven by Guzman Loera’s brother in Douglas, Arizona in 1989.  In addition to the bulk cash smuggling, Guzman Loera oversaw numerous shell companies, including a juice company and a fish flour company to launder the cartel’s narcotics trafficking proceeds.