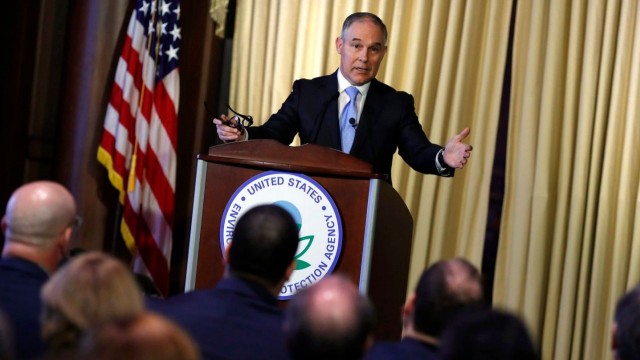 The Environmental Protection Agency (EPA) announced Tuesday, to the delight of rural America, that the Trump administration is moving to rescind the Obama era’s “Waters of the United States” (WOTUS) regulatory rule.

WOTUS gave the federal government effective authority over water use on 247 million acres of American farmland.

EPA Administrator Scott Pruitt, together with Secretary of the Army for Civil Works Douglas Lamont, signed a proposed regulatory rescission of WOTUS. As soon as the proposed rule change can be published in the Federal Register, under Docket ID No. EPA-HQ-OW-2017-0203, the public will have a 30-day comment period to “review and revise” the definition of “waters of the United States.”

The EPA took to Twitter at #WOTUS to call its action a significant step to return power to states and provide regulatory certainty to the nation’s farmers and businesses. The EPA added that its decision is consistent with the Executive Order signed by President Trump on February 28, aimed at “Restoring the Rule of Law, Federalism, and Economic Growth by Reviewing the ‘Waters of the United States’ Rule.”

The Obama administration’s WOTUS regulatory expansion cleverly redefined the term “navigable waters” to include “intermittent streams.” Environmental activists hailed the WOTUS’s expansion of federal jurisdiction over land and water use as an essential common-sense-rule to protect water for wildlife and drinking water supplies for 117 million Americans.

But the American Farm Bureau Foundation warned that a plain-reading of WOTUS meant that federal regulatory control could be asserted over any land surface that had ever experienced rain flow, had been flooded, or had irrigation ditches. Farmers argued that the federal regulatory redefinition could usurp state control of water use for America’s entire 247,417,282 acres used in row-crop cultivation.

The basis for federal jurisdiction over “navigable waters” lies in the U.S. Constitution’s Commerce Clause [Article 1, Section 8], which gives the federal government extensive authority to regulate interstate commerce. The U.S. Supreme Court ruled in the landmark case of Gibbons v. Ogden (1824), that federal law has precedence in licensing vessels that moved in and out of U.S. ports.

The Commerce Clause was expanded with the passage of the “Rivers and Harbors Appropriation Act of 1899,” which forbid building any unauthorized obstruction to the nation’s “navigable waters” and gave enforcement powers to the U.S. Army Corps of Engineers.

President Nixon tremendously expanded the Commerce Clause with the passage of the Clean Water Act of 1972, which was supposed to create a national policy that would protect America’s public drinking water supply from contamination.

There currently are 18 federal lawsuits in various U.S. District Courts and about 22 federal appeals court petitions in various districts over WOTUS. The U.S. Court of Appeals for the Sixth Circuit issued a nationwide stay on October 9, 2015 against WOTUS’s enforcement under the Clean Water Act. The case was quickly appealed and the

The Waters of the U.S. rule was a ridiculous usurpation of power by the EPA—so ridiculous that bipartisan majorities in the House and Senate voted to overturn the rule last year. The federal government has no right to regulate intermittent streams, creeks, and ponds, especially when that water is on private property. The Trump Administration’s decision today to withdraw this rule makes things right by getting Washington out of what it had no right to be involved with in the first place.

The West has finally won in the battle over the Obama administration’s WOTUS rule. This regulation would have been a disaster for the West and rural communities across the country, giving Washington near-total control over water resources. The livelihoods of American farmers, ranchers, and entrepreneurs were at stake. I applaud the Trump administration for siding with American jobs and rescinding this harmful rule.