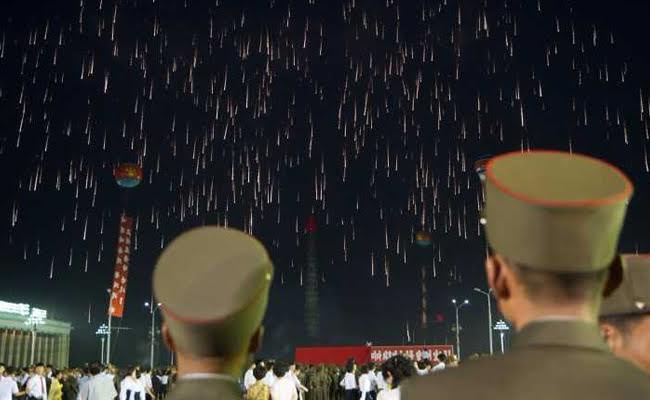 Pyongyang (AFP) – Fireworks lit up the sky over Pyongyang’s Juche Tower as North Korea celebrated its launch of an intercontinental ballistic missile, a milestone in its decades-long weapons drive.

The stone monument to the ideology of founder Kim Il-Sung stands in the centre of the capital, topped by a red glass flame.

Under current leader Kim Jong-Un, Kim’s grandson, the isolated, impoverished country has made rapid progress towards its dream of building a missile that can deliver a nuclear warhead to the United States.

On Tuesday — the United States’ Independence Day — it launched a Hwasong-14 rocket that analysts and overseas officials said had a range of up to 8,000 kilometres, which would put Alaska and Hawaii within reach.

Kim, who personally oversaw the launch, described it as gift to “American bastards”.

Thousands of officials, soldiers and citizens gathered in the capital on Thursday night to rejoice.

“We enthusiastically celebrate the successful test launch of the intercontinental ballistic rocket, the greatest landmark in the history of our republic,” read a banner across Kim Il-Sung Square.

Speakers “warmly congratulated the national defence science soldiers on striking the US imperialists on the face”, KCNA reported.

If “US imperialists commit even the slightest military provocation” against the North, it cited them as saying, its army would “show to the world how the territory of the US will be reduced to ashes”.

The crowds listened impassively, before women in traditional dress and men in shirts and ties danced in formation on the plaza. The first song was “Glory to General Kim Jong Un”, KCNA reported.

North Korea, which says it needs nuclear weapons to defend itself against the threat of invasion, is subject to multiple sets of United Nations sanctions over its weapons programmes, and the launch triggered a new round of condemnation and anger, with the US and its allies seeking toughened measures at the Security Council.

(First reported by AFP and retrieved from Yahoo)https://www.yahoo.com/news/explosions-sky-pyongyang-celebrates-icbm-launch-022126524.html   (July 7, 2017)