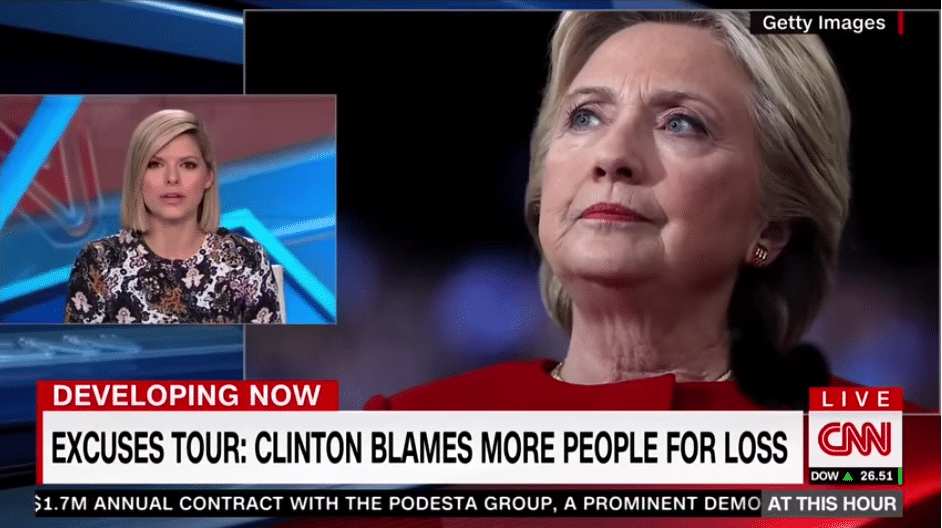 On Tuesday evening, it cost me $200 to obtain the privilege of sitting in one of the top rows in the upper balcony section of a massive auditorium and watching a tiny blue dot surrounded by phlegmy yellow light.

The amazing thing about this dot is that it could talk. This was confirmed by sound emerging from speakers hidden somewhere behind me and a glance at the not-even-movie-theater-sized screen behind it. The dot congratulated members of something it called “the Hillary Clinton Fan Club,” which might be because the dot in question was, in fact, the aforementioned former secretary of state herself.

Clinton was here in the appropriately named Hill Auditorium allegedly to promote her new memoir, What Happened. It was the first book tour event that I have ever heard of charging admission, much less offering tickets — mine were among the cheapest — at prices that could easily get you into the Michigan-Ohio State game. There are 3,500 seats in the auditorium, and all of them looked full.

But the really extraordinary thing was that Clinton didn’t actually seem to want to talk about her book. What I heard instead sounded a lot like a cry for help.

A few weeks before Election Day last year, Clinton challenged Donald Trump to say that he would unconditionally accept the results on Nov. 8. It was a perfect gotcha question for someone of Trump’s temperament and he spent days hemming and hawing and publicly weighing various nightmare hypotheticals, but eventually he said that he maybe kind-of would.

It is now clear that someone should have asked Clinton the same question.

Clinton still isn’t accepting “the legitimacy of the election,” as she put it. And why should she, when she knows that more than 200,000 undisclosed individuals in Wisconsin were prevented from voting — they must be the cousins of all those illegal immigrants who, according to Trump, pulled the lever for her in New Hampshire — and that every single one of them supported her? Why, if you believe that miscellaneous “Russians” — at one point she referred to a generic character named “Igor,” which is funny if your level of engagement with Russian culture does not extend far beyond Rocky and Bullwinkle horizons — bought Twitter ads in the hope of targeting 60- and 70-something union retirees in Macomb County, Michigan, would you not think you really won?

It’s not just voter suppression in a state where Trump couldn’t even beat Sen. Ted Cruz in the GOP primary that Boris and Natasha spoiled Clinton’s victory. She also insisted that James Comey — who has apparently gone from being the sensible public servant who refused to recommend charges over the handling of her “damned emails” to the villain of the October press conference to the selfless note-taking hero of the Russia investigation to being an election-rigging monster again — did her in with unnamed female suburban voters who would otherwise have sworn her allegiance as a matter of course.

But what she thinks really sealed her fate with undecided voters was a conspiracy theory surrounding child molestation and human sacrifice and the Illuminati at Comet Ping Pong, a pizza parlor in Washington, D.C. Call me crazy, but I think that anyone willing to believe on the basis of a Reddit thread that one of your chief pleasures in life is sitting down with your friends to eat yeasted flatbread made from the corpses of kidnapped rape victims in the basement of a D.C. restaurant has probably already made up his mind about you one way or the other.

But anyway, Clinton intoned in Michigan, the Electoral College should be abolished. After all, we are in the midst of a “new Cold War,” she warned, reminding all four of us who did not applaud enthusiastically why the prospect of a Clinton presidency was always terrifying. WikiLeaks, she said, “is a wholly owned subsidiary of Russian intelligence,” which may or may not be true. If so, maybe she should ask President Obama to explain his decision to commute the sentence of that noted Putinist hardliner Chelsea Manning.

Even the perfect storm of phantom missing voters, Igor’s premium Twitter ads, Comey’s partisan treachery, obviously credible-sounding rumors about victims of ritual slaughter disguised as pepperoni, and the wholly unexpected advent of the pesky Electoral College in the midst of Cold War II is not exhaustive of the reasons why Clinton believes she really should be sitting in the White House right now. It’s also the left’s fault, you see.

Clinton said that, like the alt right, the “far left,” by which she seemed to mean supporters of Sen. Bernie Sanders, are basically all misogynists. “They say they don’t have a problem with all women, just this one woman. Then who is a woman they will support?” I don’t know, Madame Secretary, maybe Jill Stein, the preferred candidate of the hippie outside the auditorium who was handing out pamphlets calling you a war criminal? Elizabeth Warren? Rosa DeLauro? Someone who, you know, actually represents their views and does not think reinstating Glass-Steagall would be pointless and actually sees the downside of deliberately escalating tensions with major foreign powers who share our commitment to defeating ISIS.

I hope that Clinton was telling the truth when she made her umpteenth joke about how she drinks a ton of wine these days. In vino veritas, after all, and the truth in this case is pretty peachy. The former senator and secretary of state is also the author of multiple well-reviewed books for which she has received advances on par with the salaries of NFL stars regardless of how well they sold. She didn’t even have to write all of them herself, but now she is making what bar-napkin math suggests must be at least $700,000 a night talking about the latest one in front of an almost uniformly adoring audience in a town where every bellhop and waiter speaks of her in hushed awestruck tones. She is so widely admired in the United States that as I write this I am glancing down at a popular children’s book depicting her as the first woman in our history ever to have been “smart, tough, or ambitious.”

Someone needs to show her how to stop and smell the roses. The only cheerful thing Clinton said all night was that despite the rampant sexism of anyone slightly to the left of Tim Kaine she has high hopes for the future of women in American politics. I am inclined to agree.

On my way out I saw a mother and her daughter, who looked like she is about 9. “Wasn’t that great?” the mother asked.

“It was boring,” the 9-year-old said, wrinkling her nose like she was being asked to take out the garbage.

I hope this girl runs for president one day.