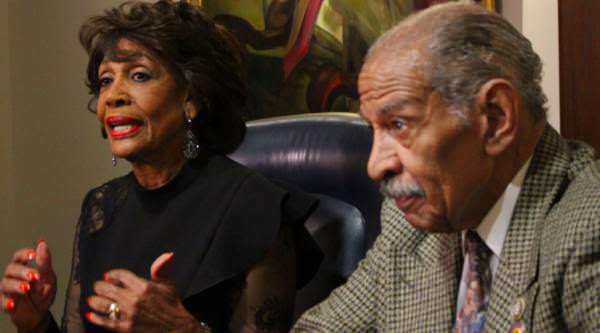 “You know, there is a member of Congress who has been supportive of women for many, many, many years,” Waters told the crowd at the Women’s Convention Sojourner Truth Luncheon in Detroit on October 28th.

“He is quiet, he is confident, he is powerful, but he has impeccable integrity on all of our issues. Give John Conyers a big round of applause!”

During the address, Waters called on women to ‘reclaim their time,’ in the Trump-era.

The footage has resurfaced amid reports that Conyers used taxpayer money to fly women into D.C. to meet with him in hotel rooms.

As TGP reported, The documents were first provided to BuzzFeed News by Mike Cernovich.

Documents from the complaint obtained by BuzzFeed News include four signed affidavits, three of which are notarized, from former staff members who allege that Conyers, the ranking Democrat on the powerful House Judiciary Committee, repeatedly made sexual advances to female staff that included requests for sexual favors, contacting and transporting other women with whom they believed Conyers was having affairs, caressing their hands sexually, and rubbing their legs and backs in public. Four people involved with the case verified the documents are authentic.

Buzzfeed also reported that staffers were tasked with flying women in for Conyers using Congressional resources.

One affidavit from a former female employee states that she was tasked with flying in women for the congressman. “One of my duties while working for Rep. Conyers was to keep a list of women that I assumed he was having affairs with and call them at his request and, if necessary, have them flown in using Congressional resources,” said her affidavit. (A second staffer alleged in an interview that Conyers used taxpayer resources to fly women to him.)

Former employees also said that Conyers made it very clear that if they performed ‘personal favors’ it would lead to salary increases and promotions. It was well known Conyers was having affairs with multiple female staffers. He often made sexual advances towards women and grew angry if they brought their husbands around.