The liberal media and DC establishment suffered a complete meltdown on Thursday after the sudden resignation by Secretary of Defense James Mattis.

Talk of impeachment, coups, and suicide abound over fears that Mattis was the last ‘adult’ keeping President Trump in check. Mattis resigned as Trump moved to assert mastery over his presidency this week in key areas after nearly two years on the job. 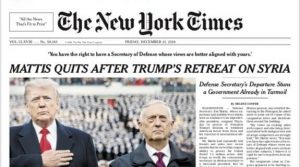