Saturday Night Live cast member Pete Davidson has taken his obsession with Hillary Clinton to the next level by getting a tattoo of the former First Lady on his arm.

“Wanted to get @hillaryclinton a Christmas gift so I got a tattoo of my hero,” Davison captioned a photo of the tattoo on Instagram. “Thanks for being such a badass and one of the strongest people in the universe.” 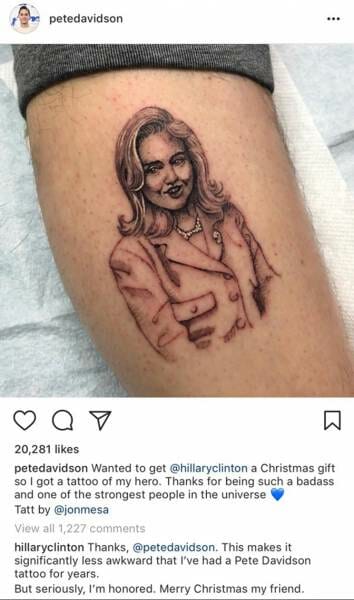 Also, what the fuck is wrong with you? https://t.co/9kXEJjSjek

this tattoo looks like Michelle Pfeiffer cosplaying as Alvin & the Chipmunks https://t.co/wNa3HM3Sy6

This is the funniest thing an SNL cast member has done in years https://t.co/ciQLNWtKHr