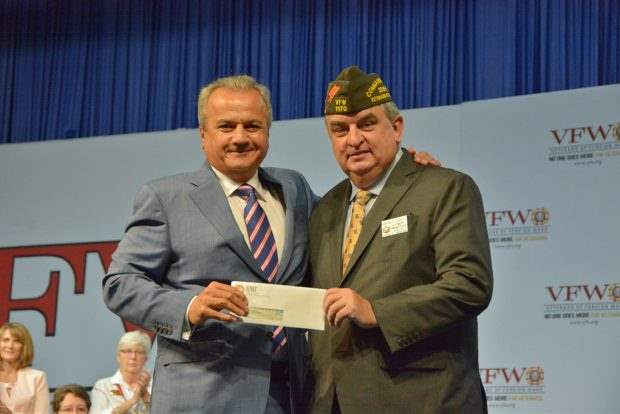 Imperato conveyed his appreciation for Denisewich’s service to our great nation and his dedication to our nation’s veterans, service members, and their families.

“It may be a bit unfair to condense a 36-year military career into a couple of paragraphs, and I am honored to try,” Imperato said. “Colonel Denisewich is a veteran of the U.S. Army and recipient of the Afghanistan Campaign Medal and the Global War on Terrorism Service Medal. He is an advocate for veterans, helping them to navigate the confusing maze of the Department of Veteran Affairs to secure the benefits they have earned and truly deserve. I am humbled to stand beside him and before such an esteemed audience.”

In addition to receiving a Henry Military Service Tribute Rifle, Mr. Denisewich was presented with a Certificate of Appreciation signed by both Brian Duffy, Commander-in-Chief of the VFW, and Anthony Imperato.

In late 2016 Henry Repeating Arms partnered with the VFW to establish a fundraising program that would raise money for the VFW National Headquarters and offer individual VFW Posts the opportunity to enhance their fundraising efforts.

Imperato told the crowd, “This new program has generated $9,000 so far. Feeling the swell of patriotic pride as I do when attending this annual convention, we are adding to that and I am honored to present the VFW with a check for $50,000.”