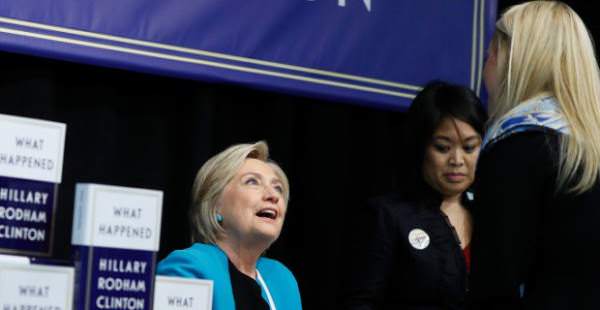 Failed Presidential candidate Hillary Clinton held a book signing at the Barnes & Noble in Union Square on Tuesday to mark her launch of her memoir ‘What Happened‘.

Rebel Media reporter Laura Loomer confronted Hillary Clinton about her 33,000 emails and Seth Rich before being dragged out by Secret Service.

Laura Loomer live streamed her wait in line on Periscope as she zig-zagged through the line to confront Hillary. “So the American people would like to know, what happened to your 33,000 emails?” What happened in Benghazi?”

Hillary quickly retorted with a fake smile on her face, “Go read the book”.

Loomer then confronted Hillary Clinton about the Haitians who never received their earthquake relief from the Clinton Foundation funds. “What happened to the millions of dollars that was supposed to go to the people in Haiti?”

Hillary then replied, “You know what? I’m so sorry you believe things that are untrue”.

Hillary tried to ignore Loomer by speaking to the next person in line but Loomer continued to ask her questions.

As Loomer walked away she spotted Huma Abedin and confronted her about her pervert husband Anthony Weiner. Yikes!

“When are you gonna divorce your husband for texting underage girls?”

Paul Joseph Watson reported that Hillary showed up an hour and a half late leaving two people with heat exhaustion from waiting in the hot sun:

Perhaps showing her arrogance and disdain for her own supporters, Clinton turned up an hour and a half late for the event and made them stand outside in the hot sun, including some people who were disabled.

After she finally arrived, two people who were suffering from heat exhaustion and dehydration had to be taken away by ambulance. Some people had been queuing up since the early hours of the morning. One elderly woman asked Clinton’s security for water but was denied.

This isn’t the first time Laura Loomer has confronted the Clintons. She showed up to Chelsea Clinton’s book signing back in June and asked her to sign it for ‘my friend Juanita Broaddrick, a woman who was silenced, but persisted’.