Editor’s note. “Interfaith dialogue” is a big thing right now in the West, as churches seek to understand the Muslim population growing up around them due to immigration. But much of what passes for real dialogue is nothing more than a contrived discussion about a “common word” and the “same god” theories while glossing over core beliefs that seem to clash. Below is one woman’s experience at a recent event in which a church is targeted for conversion to a mosque, first reported last week by LeoHohmann.com. She writes under the pen name Helen Abousamra.

On a dreary, rainy Sunday in Southeast Michigan, my husband and I decided, after attending church in Troy, that we would drive over to nearby Sterling Heights where the former St. Mark Lutheran Church is being converted into a Sunni mosque.

A group of Pakistanis had circulated flyers in the community advertising an “Open House” from 12-6 p.m. on July 22. We thought we’d take them up on it.

Upon turning into the long driveway that led to the church, we were greeted by a rather lonely-looking, tiny house that seemed out of place, as if it were set down as an afterthought. There were no trees or shrubs adorning it. We learned later that this will be the new home of the mosque’s imam. The church building itself was about 80 feet beyond it.

Only six cars dotted the parking lot. We sat for a few minutes hoping more would arrive. We prayed, asking the Lord to give us His wisdom.

If this was an open door, we hoped to speak to a few of the Muslims regarding not only their plans for the church buildings but perhaps engage them in an honest theological conversation. I placed my beloved pocket New Testament in my purse just in case, and we ventured past a group of five kufi and thobe-wearing Pakistanis speaking with what appeared to be a Muslim man who was not wearing the garb.

When we entered the building, I noticed a tall, non-Muslim American standing at a wooden counter poring over hand-drawn configurations of the property. He was the Realtor, and he eagerly and excitedly told us the specifics of the property itself. The existing developed property is 460 feet, and there’s an additional 900 feet of dense woods behind the parking lot. The lot itself is narrow yet deep. Right next door, to the east, is a large Romanian Pentecostal Church. I wondered what the folks in that church thought of their soon-to-be new neighbors, or if they were even aware of them.

Next to the Realtor’s stack of papers and drawings, I saw a large quantity of pristine open-house invitation postcards, like the one below: 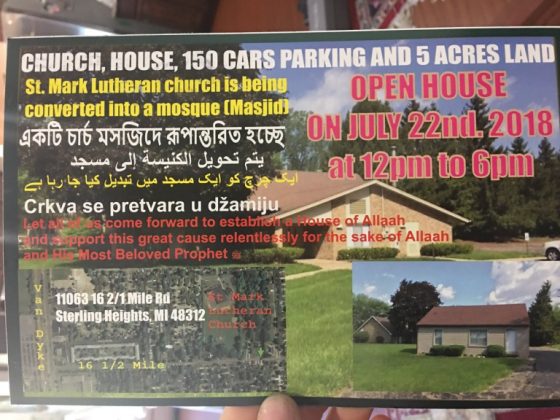 I’m guessing they wanted monetary donations not just a “Hi, welcome to the neighborhood” speech.

While we spoke with the Realtor, three Muslim men (there were no women present) made a beeline for us. Their hollow eyes said, “You’re not Muslim …Why are you here?”

We answered their unspoken question with, “A friend of a friend received one of your open-house invitations and since we were in the area we thought we’d stop by and ask what your plans are for the property.”

They responded that they were “converting this church to a mosque.”

“Where do you attend now?” I asked them.

Two of the men said they are members of the Islamic Association of Greater Detroit [IAGD] in Rochester Hills. The third did not answer.

“There are several mosques here in Sterling Heights,” the man in the navy thobe said with a big grin, and he proudly gave the locations of them, iincluding a Shia mosque that has yet to celebrate a ground-breaking.

“We live near the IAGD in Rochester Hills,” my husband told them, “and that’s not far from the Ahmadyya mosque.”

“We do not accept them,” they all chimed. “They believe there are prophets after Prophet Muhammad, peace be upon him.”