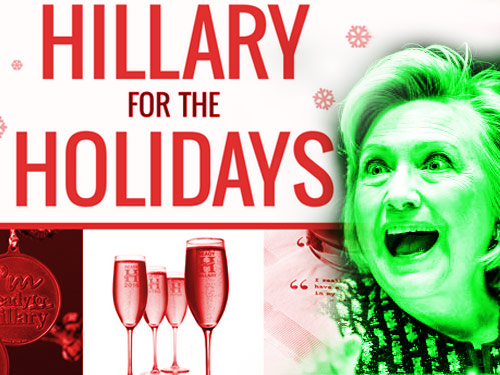 Hillary rolled her eyes as the television screen filled with a scene from the White House Christmas Eve celebration. She glared at the image of the first family, laughing and toasting with egg nog. “I am so sick of these people. Watching this makes me wish I had never been born.”

She heard the voice of a secret service agent through the heating vent. “You and me both.” Followed by laughter.

She turned off the television, threw the remote against the wall, smashing it. No matter, she had a big supply of those. She got up and headed for the kitchen. She found a group of agents playing cards. One sat up straight and smiled at her. “Merry Christmas, ma’am.”

“Bite me. You guys know where my husband is?”

The agent looked at his cohorts. “He, uh, said he had some Christmas stuff to do.”

“In other words, he’s doing Holly or Noelle.”

She put up her hand. “Nevermind. I’m going for a walk in the woods.” The agents started to get up. “By myself.” The agents sat as she moved to massive the Sub-Zero refrigerator, opened it, and pulled out one of the ten gallons of chardonnay. She opened a cabinet to get a glass, then thought better of it. She threw on a coat and headed out the door.

The wine was having its desired effect. Hillary’s head began to spin so she lay down on a pile of leaves just as light snow began to fall. It was getting very cold, so she buttoned up her coat. “Need more antifreeze.” She took another swig from the gallon jug of wine and looked up at the stars. “If you wanted me to lose every time, why am I even here? Why have you tortured me this way? I wish I’d never been born.”

She finally succumbed to the wine, closed her eyes and fell asleep.

Her eyes flickered open. Her vision cleared and she focused on a beautiful blonde woman standing over her dressed in the brightest white she’d ever seen. The woman’s face and dress had an ethereal glow in the moonlight. Hillary was no longer cold, and noted the snow had stopped. She leaned up on one elbow. “Is this Heaven?”

“Field of Dreams joke. We use it all the time. Appropriate in your case since you ran for President and spent so much time in the state.”

“No. You’re not dead since you’ve never been born. That was your wish before you fell asleep, remember? And what you said when watching television. Of course we’ve also had that prayer request on your behalf from about twenty million people. Anyway, I’m here to show you how the world looks without you. Each life touches so many others. You need to see how your absence changed things.”

“So you’re like that Clarence character in the movie?”

Hillary rolled her eyes. “Is that another attempt at humor?”

“No, that’s really my name. It’s just a coincidence. You should be familiar with those since you used them as an excuse in your campaign so many times.” The angel extended her hand and helped Hillary up. “Come on. We’re going on a tour.” The angel snapped her fingers and they were gone.

Hillary materialized in the middle of a snowstorm. She saw thousands of people wearing green and yellow heading in the same direction. She turned to Monica. “Where are we?”

“So, I touched someone’s life here?”

“Nah. Since you didn’t bother to visit this state during your campaign, I thought you might want to see what it looks like.”

Hillary glared at the angel.

“Sorry, I couldn’t resist. Anyway, on with the tour.” Snap.

She found herself on the White House lawn and couldn’t help but smile. “I knew it. The whole campaign was only a dream.”

Monica shook her head. “This aint the TV show Dallas and you aint Bobby Ewing. 2016 happened. Get over it. And you’ve never been born, remember? You’re still not the President.”

“Let me ask you a question… was everything set in stone for my life? Is there such a thing as fate?”

“Kinda sorta. It’s hard to explain. But there were several possibilities for you.”

“Well, was there ever any heavenly scenario in which I would have been elected?”

“Nope. There was even a timeline in which you ran against Kid Rock and lost. But we angels thought Trump was more fun.”

“Because Bill still became President in 1992.”

They started walking toward the front door, then entered the building and headed toward the Oval Office. “So who’s the First Lady?”

Monica opened the door, revealing her husband behind his desk surrounded by several gorgeous twentysomething women in revealing outfits. “There is no First Lady. He’s the first bachelor President of modern times.”

“Who the hell are all these bimbos?”

“They’re known as the Nighttime Cabinet. They’ve got a huge following. The public can’t get enough of this. They call Air Force One ‘the flying mattress.’ And there’s a reality show called Real Girlfriends of the White House.”

“You cannot be serious.”

The angel shrugged. “Without you around he’s out of control. Wanna see more? His executive secretary is a former centerfold.”

“I’ve had enough. Get me outta here.”

Hillary found herself outside a small house, beautifully decorated for Christmas. The scene through the window was one right out of a Normal Rockwell painting. A family gathered around a piano in front of the Christmas tree singing carols. She could hear the music as they walked close to the window.

Hillary studied their faces but didn’t recognize them. “I don’t know these people.”

“Well, you’ve never met, but you’re familiar with the father.”

“But surely you know the name. Check out the mailbox.”

Hillary turned and saw the last name. “Still no idea who they are.”

“The father is one of the four men killed in the Benghazi raid. But since you’ve never been born there was a different Secretary of State who sent the support that was requested by the Embassy. No one ever died. This man made it home to his family.”

“Why are you showing me these things? Isn’t there something bad that happened because I wasn’t born? Something terrible I could have prevented?”

Hillary’s eyes widened as she watched the new Senator from New York being sworn in. “Anthony Weiner? Seriously?”

“You weren’t here to carpetbag the seat. So he grabbed it.”

“So, let me get this straight… if I’m born, I prevent him from becoming a Senator?”

“And if I’m not born, does he eventually go to jail?”

“No. He remains a bachelor since he never meets your assistant. And he’s Bill’s wingman. He doesn’t need the internet. Just drops by the White House every night. Bill would never let anything happen to his best buddy Carlos Danger. They have so much in common. And after Bill’s out of office, the Presidential library in Arkansas makes the Playboy mansion look like a convent.”

“No, that’s the end of the tour. Not it’s time for you to make a decision. I can grant you the wish that you’ve never been born, or return you to your current life. Though bear in mind you will never, ever be President.”

“I guess I’ll go back to the living, if nothing else to annoy Bill.”

The angel nodded. She snapped her fingers and they materialized back in the woods.

Hillary noted it was snowing again and freezing. “Well, I’m not sure I should thank you for that… tour.”

“I know some things are hard to swallow, but you wanted to know. It’s my job to show people what might have been.”

“But the things you showed me were so awful. What kind of angel are you?”

“Well, Hillary, if you’re familiar with the Bible… I’m a fallen angel.” Monica threw back her head and laughed as her eyes turned red.

“Look at it this way. When you wrap things up here on Earth… at least you won’t be cold!”