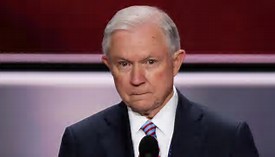 Attorney General Jeff Sessions’ testimony before the Senate Intelligence Committee will be made in an open hearing.

The announcement came last week that Sessions would follow up ex-FBI Director James Comey’s testimony before the same committee with his own appearance, but it was speculated that appearance would be in a closed session. The Intelligence Committee’s chairman, Sen. Richard Burr (R-NC), announced Monday that the attorney general’s testimony will be before the public as Comey’s was last Thursday.

The subject of the hearing, which will take place Tuesday at 2:30 p.m. Eastern Time in the Hart Senate Office Building, will be the ongoing probe into Russian involvement in the 2016 presidential campaign and the now-spiraling controversy about Comey’s firing from the FBI and subsequently leaks to the press of potentially privileged memos about his conversations with President Donald Trump.

Sessions, who recused himself from all involvement in the Department of Justice’s own Russia investigation, was thrust back into the fracas by Comey’s testimony. The fired FBI head strongly implied that the attorney general refused to protect him from or offer advice on how to deal with an overbearing President Trump. He also posited that he was not made aware of the scope and parameters of Sessions’ recusal. Sessions’ spokesman categorically denied these claims in a statement Friday, offering an email sent to Comey in March laying out the attorney general’s reasons for recusing himself and the extent to which he did so.

Among the more striking revelations of Comey’s testimony was his admission that he had himself used long-time friend and Columbia University law professor, Daniel Richman, to leak the now infamous “let this go” memo on an alleged conversation between himself and the president. Comey further admitted that he did so specifically to force the appointment of a special counsel, a purpose fulfilled when Deputy Attorney General Rod Rosenstein, who had been heading the investigation, appointed Comey’s predecessor and mentor Robert Mueller to that position last month.

Also likely on the docket will be Sessions’ own interactions with members of the Russian government. The attorney general’s political opponents have made much of his failure to disclose, during his confirmation hearings and on his security clearance application, certain meetings he had, primarily with Russian Ambassador Sergei Kislyak, during the 2016 campaign. Despite Sessions’ insistence that all these meetings were made in the scope of his official duties as a United States senator, voices from the left, such as Sen. Elizabeth Warren (D-MA) and House Minority Leader Nancy Pelosi (D-CA), have gone so far as to demand Sessions resign over the matter.

Sessions will likely seek to dispel whatever taint Senate Democrats attempt to create over these meetings and clarify the exact chain of events that led to Comey’s dismissal, an action he publicly endorsed at the time. Sessions and Comey’s testimony in rapid succession before the Senate Intelligence Committee is not the first time the two men will lock political horns. As far back as October, Sessions was expressing his misgivings about Comey. The pair’s latest spar will play out before the American public Tuesday afternoon.