Judge Emmet Sullivan, whose disdain for General Michael Flynn led him to ask prosecutors if they had considered charging him with treason in a hearing last December 18, is twisting himself into a pretzel in order to avoid throwing out Flynn’s guilty plea and dismissing the case. The Department of Justice’s request for dismissal after a review of the case by career prosecutor US Attorney Jeff Jensen is thus postponed if not denied.

This is a startling reversal for the judge, who on 24 previous occasions had rejected efforts by outside parties claiming an interest in the case to file such briefs. In a brief filed in response (pdf here) General Flynn’s attorneys Sidney Powell and Jesse Binnall pointed out the judge’s inconsistency: 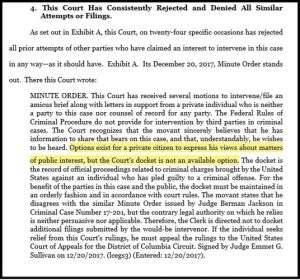