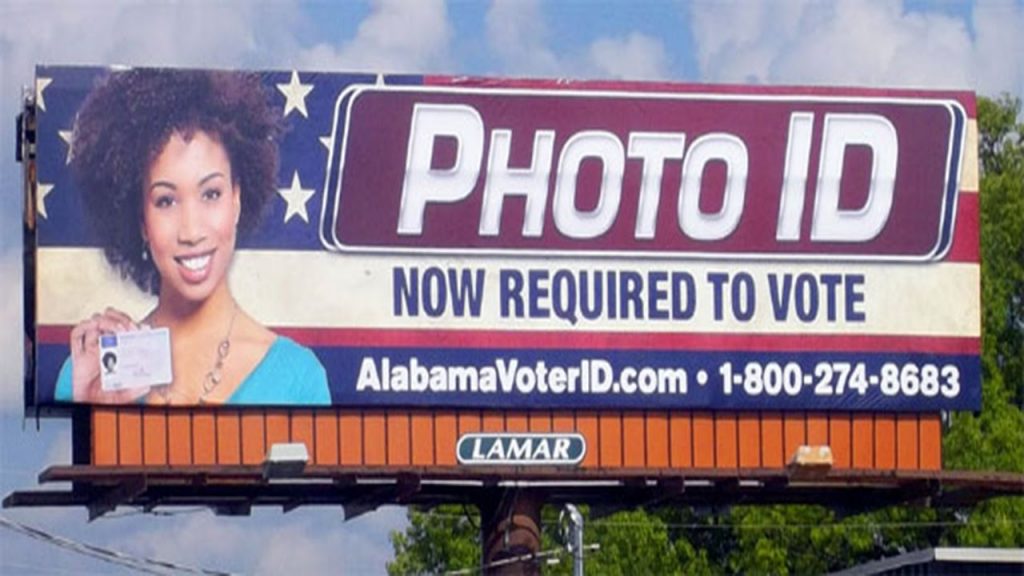 A federal judge in Alabama has thrown out a lawsuit against the state’s voter ID law, finding that the law doesn’t prevent anyone from voting because “nearly the entire population of registered voters in Alabama already possess a photo ID that can be used for voting.”

For those who don’t, obtaining a qualifying ID can be done “with little to no effort and no cost.”

In 2011, the Alabama legislature passed a photo ID requirement for both in-person and absentee voting. The law was enacted in an effort to strengthen voter confidence and to reduce the potential for voter fraud in the state.

The Alabama law accepts seven different types of ID, including an Alabama driver/non-driver’s license, a photo ID card issued by any state or the federal government, a U.S. passport, a student or employee ID, a military ID card, or a tribal ID card.

Voters can obtain a voter ID card from the state for free—something that as of fall of 2017, only 33 voters in the entire state had requested. And voters who need a birth or marriage certificate to get an ID can get those for free, too.

In addition, even if voters show up at a voting booth without an ID, they can still vote if two elections officials at the polling place positively identify them.

Those voting absentee are required to include a photocopy of their photo ID (in a separate envelope) when they mail in their ballot. Individuals without an ID can vote by provisional ballot, and that ballot will be counted if they show the local county registrar an ID by the Friday after the election.

Despite these voter-friendly provisions, the NAACP and a number of other plaintiffs challenged the law claiming that it violated the Voting Rights Act and the Fourteenth and Fifteenth Amendments to the Constitution.

They alleged that it would disproportionally affect minority communities because minority voters hold an ID at a lesser rate than whites, and would also supposedly find it more difficult to obtain an ID than whites in Alabama.

But that is simply not the case. As Judge Scott Coogler pointed out, “[m]inorities do not have less opportunity to vote under Alabama’s Photo ID law, because everyone has the same opportunity to obtain an ID.” And obtaining an ID is very easy.

In fact, Coogler concluded that the provisions of the law are such that “[t]here is no person who is qualified to register to vote who cannot also get a photo ID.” The program to provide a free voter ID card is widely accessible to anyone who makes the effort to utilize it.

There is even a mobile ID unit that can travel to voters who lack transportation to get to an ID center. That mobile ID unit has “made more than 350 visits across the state” and visited every county.

Coogler argued that “the ‘impact’ of the law should not be measured by how many people lack a given ID at a given point in time, but by whether someone without an ID can easily get one.”

In this case, he found that the state had provided adequate accessibility and information to help voters—including minorities—obtain proper forms of ID.

The foolishness of this lawsuit was shown by the expert testimony in the case. The NAACP’s expert claimed only 1.37 percent of whites, 2.44 percent of blacks, and 2.29 percent of Hispanics lacked an acceptable ID.

So the plaintiffs’ case was based on the laughable claim that an almost negligible one-percentage point difference between whites, blacks, and Hispanics who lack an ID card was so discriminatory that it violated the Voting Rights Act and the Constitution.

By the way, it turned out that when a survey was done of that small percentage of minorities who supposedly didn’t have an ID, 80 of them were dead, 784 no longer lived at their registered address, and 1,933 questionnaires were returned as undeliverable.

Alabama’s expert determined that only 0.87 percent of whites, 1.44 percent of blacks, and 1.26 percent of Hispanics lack an ID. He also found that black and Hispanic voters without an ID were “actually more likely than white voters without photo IDs to live” closer to a county office where an ID could be obtained.

Coogler also discussed something that opponents of voter ID and other security measures and their friends in the media say doesn’t exist: Alabama’s documented history of voter fraud, including absentee ballot fraud, which this ID law was also intended to target.

According to Coogler, affidavits and courtroom testimony have established the following abuses in the state:

The Greene County case is described in a Heritage Foundation case study from 2008 that detailed the conviction of 11 conspirators who had been fixing local elections for years. That case in particular shows how voter fraud threatens the right to free and fair elections and how those most often harmed are the poor and minorities.

In addition to Greene County, The Heritage Foundation’s own voter fraud database shows numerous other convictions in the state for crimes ranging from vote buying to fraudulent use of absentee ballots to ineligible voting by an illegal alien.

The bottom line is that Alabama’s ID law for both in-person and absentee voting is constitutional and does not violate the Voting Rights Act.

Alabama thus joins more than a dozen states that have implemented sensible, nondiscriminatory voter ID requirements—requirements that have been upheld in the courts in almost every state with only a few exceptions.