Dependence on 90% voting support from African-Americans for electoral success is the jugular vein of the Democratic Party.  President Trump’s rising support among black voters is correctly seen as an existential threat to the party’s – and progressivism’s – ability to win national elections.  That’s why I thought it was big news last Saturday when Rasmussen proclaimed that black approval of Trump had hit 29%, even though most of the media ignored it for reasons AT readers well understand.

But the surge in black support for President Trump is real – so real that even the far-left NAACP discovered it in a poll, though that poll (perhaps with a differently worded question) put the support at 21%.  Here is a graphic presentation of the result, showing the support for Trump among various ethnicities: 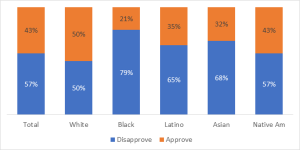 What’s a race victimology group to do with this?  Of course, double down on charges that Trump is a racist.  Paul Bedard of the Washington Examiner: