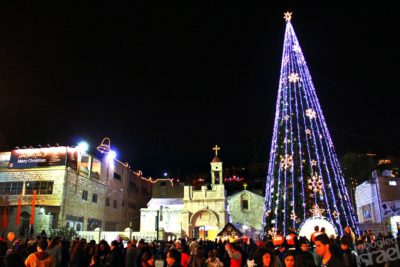 The northern Israeli town of Nazareth, best known as the childhood home of Jesus Christ, will not be celebrating his birthday this year, and the Muslim mayor is blaming President Trump.

Trump’s recent announcement that the United States will recognize Jerusalem as the capital of Israel is killing the Christmas spirit, he said, so the Nazareth will cancel all scheduled events, including its massively popular annual Christmas market and festival.

“The annual events are a huge tourist attraction during the Christmas season,” Fox News reports.

Trump’s “decision has taken away the joy of the holiday and we will cancel festivities this year,” Salam said.

He also called Trump “wretched” and alleged the president “stabbed” Palestinians with his decision about Jerusalem.

The announcement last week that America will become the only country to recognize Jerusalem as Israel’s capital was met with violent protests throughout the Middle East and vows by terrorists to target Israel in retaliation. The city, also claimed by Palestine, is home to some of the most sacred sites in the Christian, Jewish and Muslim religions.