August the sixth is now a day that commemorates two nuclear weapons forcing surrender.  The first, of course, was the atomic bombing of Hiroshima on this date in 1945, forcing Japan to surrender, ending World War II.  The second August sixth is today, marking the moment Democrats (including presidential contenders) went nuclear, causing the New York Times to surrender editorial control of its front page to a leftist mob using Twitter in place of B-29s.

Here is the original front page, which quickly was judged insufficiently hostile to President Trump: 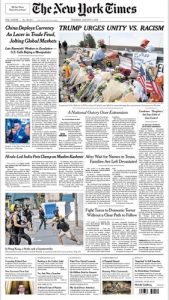 Nate Silver, the polling guru, appears to have triggered backlash from politicians and pundits with this mildly critical tweet:

Not sure "TRUMP URGES UNITY VS. RACISM" is how I would have framed the story. pic.twitter.com/quOibXsp32

Soon after, self-interested Democrats seeking to defeat Trump piled on with tones of outrage:

That’s not what happened. https://t.co/m6eIZOARcZ

Lives literally depend on you doing better, NYT. Please do. https://t.co/L4CpCb8zLi

But leave it to the real leader of the Democratic Party to deliver the decisive blow: “white supremacy”:

So much for integrity and journalistic independence.