Sarah Jeong is a writer who has just been hired by the New York Times as part of their editorial board. But she has a long history of making incredibly vile racist statements on Twitter:

Meet the newest member of the New York Times editorial board.

I'd say that these tweets were part of her resumè when she applied for the job. pic.twitter.com/CLgFvPeAgM 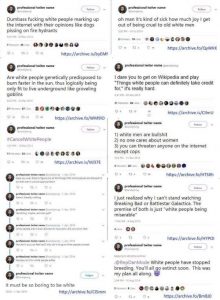 If Jeong was a Conservative, she would be run out of town on a rail. But there are different standards for Liberals and the New York Times is standing by their hire. They released this statement:

We hired Sarah Jeong because of the exceptional work she has done covering the internet and technology at a range of respected publications.