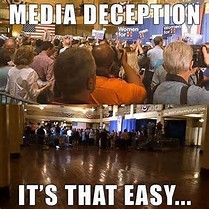 The liberal media has been attacking President Trump from the start and their offensive has only progressed since Trump won the election. We are at a point that no one knows where information is coming from and what could even be considered the truth. We have seen the left continue their efforts to remove Trump from office and draw attention away from more important issues. The left is attacking anyone with opposing views and show no sign of letting up.

We have seen the DNC and Hillary Clinton create resistance movements against President Trump and anyone who hold conservative beliefs. These resistance movement are being created to cause issues and add followers to the anti-Trump cult. The movements are a serious attack towards our government and their ability to fulfill their duties. The media is supporting the resistance and adding fuel to their fire.

The media has their own movement to attack the Trump and conservatives, which is causing more issues than the resistance movements. The media is not reporting actual news and when they do report on a real issue, it is skewed by their liberal beliefs. Many of the stories are from a “source” but never includes names or facts to back up their claims.

Not knowing if there was a connection with Russia and trump has not stopped them from creating stories. They claim that they have “sources” but the names have never been released. If the media has so many sources than they should be able to prove facts and crack the case.

When will the right go on the offensive? The left’s constant attacks and distractions have gone too far. It starts with elected Republicans, which has more control than they have had in close to 100 years. Find out what information the NSA and Obama obtained, figure out what Hillary deleted, expose member of the left that are trying to undermine the current administration. More importantly, eliminate the distractions and start making America great again.

Want more BFT? Leave us a voicemail on our page or follow us on Twitter @BFT_Podcast and Facebook @BluntForceTruthPodcast. We want to hear from you! There’s no better place to get the #BluntForceTruth