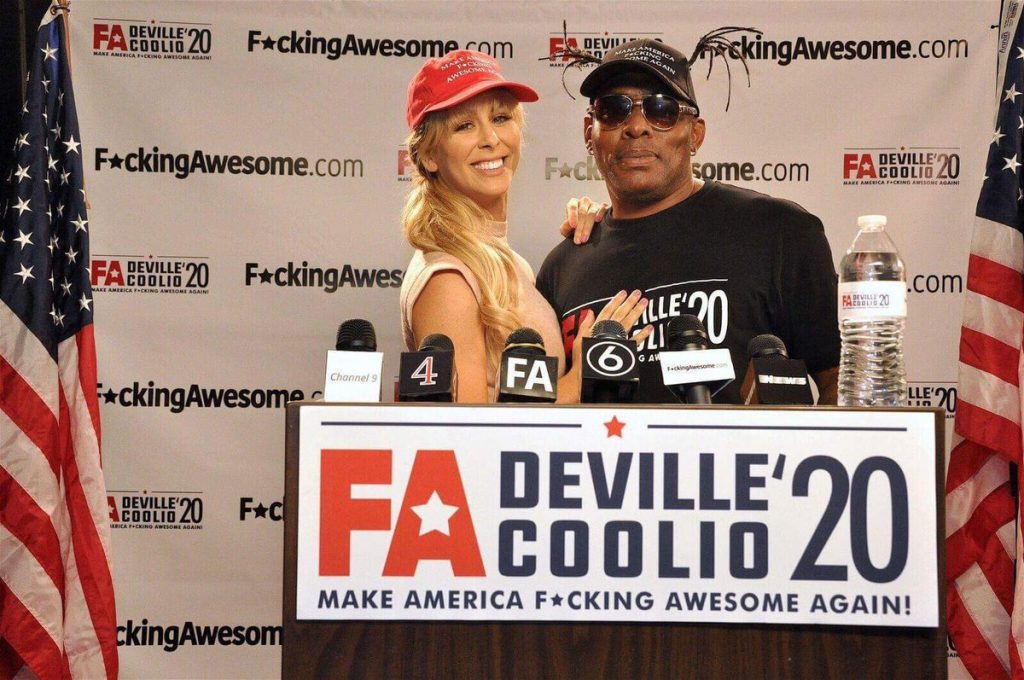 With the election of a corrupt reality TV huckster, quite possibly in the early throes of dementia, there’s no limit to who or what may run for the highest office of power in the United States.

Cherie DeVille, who’s starred in such videos as “Ass Planet” and “Hot Tub Hottie,” says she was inspired to run for office out of her “personal frustration for the current political climate.”

It’s the current political climate that makes her potential run less shocking, but, whatever.

If we look past Ms. DeVille’s contemptible career choices (besides running for president, I mean), she’s at least not talking like a lunatic.

When Donald Trump won the election last year, DeVille — who’s running alongside rapper Coolio — says she sobbed. “I didn’t cry because I hated [Trump] specifically, I cried because of what I felt that meant for the direction our country was going in.”

“We’re voting for people as if we’re on a reality television show, and my concern is if we continue to purely vote for celebrities, or political figures, or the most entertaining, they’re not always going to be quality politicians,” DeVille told ITK on Tuesday.

Of course, DeVille will run as a Democrat, should she push this thing further. I can only imagine she would get a full, exuberant endorsement from former President Bill Clinton.

“If our criteria now for becoming a political official is minor celebrity, I have that,” says DeVille, who boasts 190,000 Twitter followers. “I feel like I can be potentially what I’m feeling the American people — for better or for worse — want, which is interesting news, scandalous news, you know, not ‘boring’ political news.”

“But at the same time [I can] do what the American people really need,” she continues, which is “having a person with integrity, and having someone listen to the people, and actually care about America in public office.”

She may need to spiffy up her campaign slogan, a bit.

Ok. She’s got time to work on that.

Speaking of her choice for a running mate:

“He’s lived and exemplifies what I consider the American dream,” DeVille says. While a rep for DeVille told ITK the Grammy winner wasn’t available for comment on the 2020 campaign, Coolio told Los Angeles’s KESQ-TV in a recent interview, “We need normal, regular, everyday people in office.”

Well, sure. Normal, regular, everyday people are always getting arrested for possession of crack cocaine and for trying to smuggle loaded, stolen firearms through the airport.

I’m sure none of that would come back on him in a bad way on the campaign trail.

To date, DeVille has not filed the necessary paperwork with the FEC to get the ball rolling on a legitimate run for office.

Does she really think she has a shot?

“Before Trump was president, I would’ve laughed at that question,” she says.

She’s got a point.

“But now, you know, for better or for worse, America loved this past election season. Even 18- and 19-year-olds that I perform with had a pulse on what was going on in America,” DeVille says.

DeVille credits that “purely to the fact that [Trump’s] a celebrity. He’s a character and he made the news interesting.”

She says she can do the same, along with being a candidate that has the “goals and hopes and dreams of the American people in mind — not my own narcissistic, personal plan.”

And there should be no one that took a Trump candidacy seriously saying a single word against this, now.

Not a single word.

Welcome to your new America.