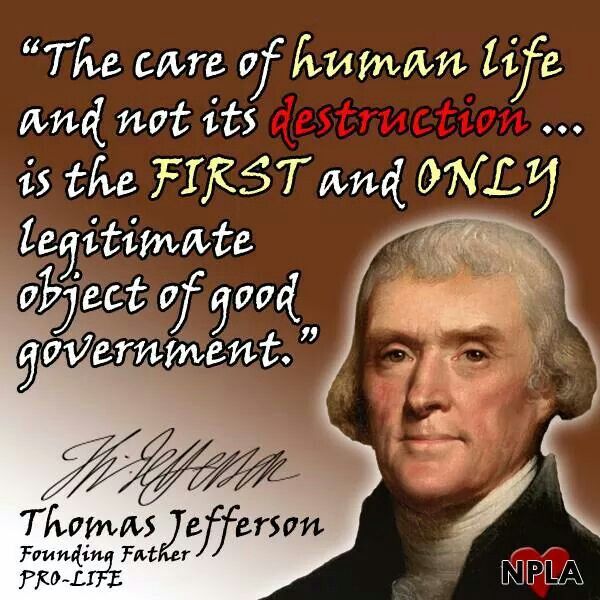 In the Declaration of Independence, Thomas Jefferson articulated fundamental truths upon which the United States of America was founded. These truths included that each of us possesses a set of unalienable rights granted by God. Included among these God-given prioritized rights are the rights to life, liberty, and the pursuit of happiness.

Recognition of these inherent rights once helped propel our people into revolt against a tyrant. Respect for our God-given rights is an essential component of our American Civilization. Congress has a responsibility to ensure the Jeffersonian Truths of the Declaration of Independence are protected for current and future generations of Americans.

Regrettably, our nation has seemingly forgotten the importance of adhering to Jefferson’s vision. Instead, we have allowed a new tyranny composed of nine unelected Justices on the Supreme Court of the United States (SCOTUS) to erase our foundational truths. We have traded off the brilliance of Thomas Jefferson’s specificity for a vague and inherently meaningless set of legalistic “emanations” and “penumbras” seemingly conjured out of thin air whenever activists on the Court want to replace Jefferson’s self-evident truths with SCOTUS’s black-robed judicial activism.

It’s time that Americans reclaimed our birthright, including the right to life, from the bloody hands of those who have betrayed Jefferson’s vision, resulting in the abortions of 60 million unique gifts from God. To this end, I have introduced H.R. 490, the Heartbeat Protection Act. H.R. 490 cuts through the obscuring haze of illogical judicial rhetoric and returns the right to life to the primacy our Founding Fathers intended. Under this legislation, abortionists who end the life of an unborn child whose heart is beating will be subject to imprisonment and/or a significant financial penalty. As a matter of law, the bill will ensure that if a heartbeat can be detected, the baby is protected.

By listening for a child’s detectable heartbeat, we can save the lives of over 95% of aborted babies in this country, and we will extend protection to the unborn to as early as 6-8 weeks from conception. What better way to recognize the unalienable right to life than to ensure that all babies with a beating heart are protected in the womb where all our lives began?

Currently, there are 170 members of Congress signed on to the Heartbeat Protection Act because the bill speaks to the conscience of the American people, and because these members understand we may get only one opportunity in our lifetimes to save the lives of the next 60 million babies who will otherwise be tossed onto the ghastly heap of the sins of our nation. There is not a better time than now or a more urgent time than the present to extend protections to unborn children. We have a President who would sign the bill and who is forming a conservative majority on the Supreme Court with one or two appointments imminent. No doubt pro-abortion forces will litigate the Heartbeat Bill to the Supreme Court. The court they go before now is likely to have one or two more Constitutionalists.

Let’s uproot and end the death and destruction of abortion now before millions more children are forced to suffer because we lost sight of our nation’s core principles and turned a blind eye to their God-given, unalienable right to life. Congress should follow the lead of Thomas Jefferson and take this opportunity to declare its own independence from a deadly edict issued by judicial tyrants in Roe v. Wade. Congress can do so by passing the Heartbeat Protection Act immediately and sending it to President Trump for his signature.