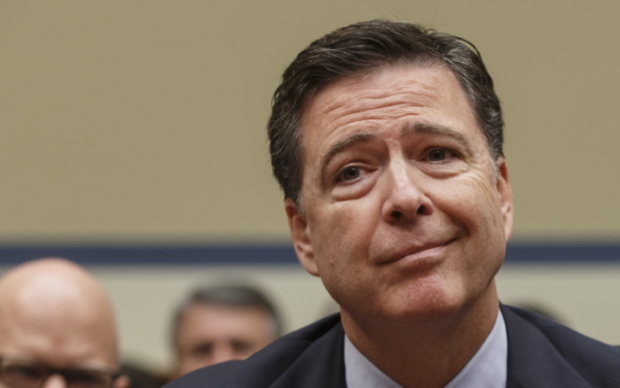 Former FBI Director James Comey may have broken the agency’s security protocols by putting classified information in more than half of the memos he wrote about his personal recollections of his conversations with President Trump about the Russia investigation, The Hill reports.

During testimony before the Senate Intelligence Committee last month, Comey told lawmakers that he kept personal memos about his interactions with Trump because he didn’t trust the president.

“I was honestly concerned he might lie about the nature of our meeting, so I thought it really important to document,” he said. “I knew there might come a day when I might need a record of what happens, not only to defend myself but to defend the FBI and our integrity as an institution and the independent investigative function.”

Comey decided to share one of those memos with a friend of his—a Columbia University lawyer—so he could leak it to the press.

He stated during testimony that he believed the memo to be his ‘own personal document’—a “recollection recorded of my conversation to the president.”

Comey also said he believed the memos were unclassified, but suggested a couple may have contained classified information.

According to The Hill’s report, however, it wasn’t just a couple of Comey’s memos that had sensitive information.

But when the seven memos Comey wrote regarding his nine conversations with Trump about Russia earlier this year were shown to Congress in recent days, the FBI claimed all were, in fact, deemed to be government documents.

While the Comey memos have been previously reported, this is the first time there has been a number connected to the amount of the memos the ex-FBI chief wrote.

Four of the memos had markings making clear they contained information classified at the “secret” or “confidential” level, according to officials directly familiar with the matter.

A spokesman for the FBI on Sunday declined to comment.

FBI policy forbids any agent from releasing classified information or any information from ongoing investigations or sensitive operations without prior written permission, and mandates that all records created during official duties are considered to be government property. (The Hill)

While Comey initially retained the memos upon leaving the FBI, he has since turned them over to special counsel Robert Mueller.

According to The Hill’s sources, questions remain as to whether the memos were marked “secret” or “confidential” at the time he wrote them or whether they were given that categorization afterwards.

One thing is certain, however: the new revelation will open Comey up to the same probes Hillary Clinton faced over her private email server and how she handled classified information.

Ironically, that was the same issue the FBI investigated in 2015-16 under Comey about Clinton’s private email server, where as secretary of State she and top aides moved classified information through insecure channels.

Comey ultimately concluded in July 2016 that Clinton’s email practices were reckless, but that he could not recommend prosecution because FBI agents had failed to find enough evidence that she intended to violate felony statutes prohibiting the transmission of classified information through insecure practices. (The Hill)

The matter will now likely makes its way to the inspector general at the Justice Department or at the Director of National Intelligence, according to the report.