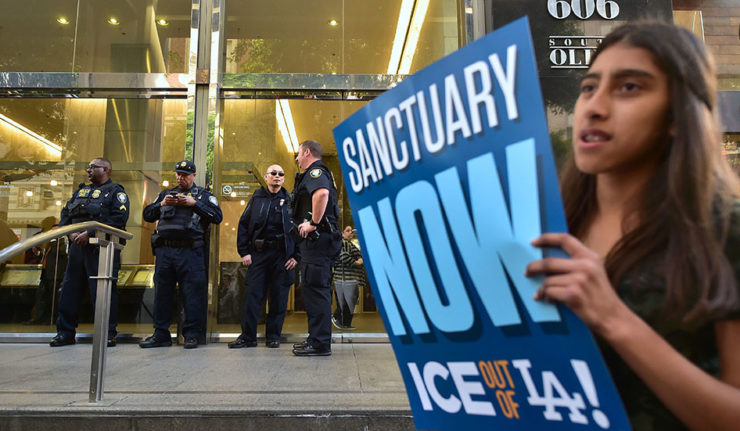 “Sanctuary cities” across the country are pledging to make one million immigrants into U.S. citizens this year, partly as a response to the policies of President Donald Trump.

According to the Washington Examiner, the initiative is being pushed by a group called “Naturalize NOW!”—which is tying its campaign to patriotic American holidays like the Fourth of July.

[t]he ‘Naturalize NOW!’ campaign, which includes liberal and progressive groups and elected officials, heralded the mayors of the cities in joining the national effort.

Most of these jurisdictions are sanctuary cities and counties.

Los Angeles, which has long been a “sanctuary city” under a local ordinance known as “Special Order 40,” has been in the hot seat nationally ever since President Trump publicly befriended Jamiel Shaw, Sr. Shaw’s 17-year-old son with the same name was gunned down by an illegal alien gang member released onto the streets of LA instead of being turned over to federal authorities for deportation.

The mayor of Los Angeles, home to millions of legal and illegal aliens, is an enthusiastic supporter of the Naturalize Now! campaign:

“We celebrate our independence on July 4, and honor the values of freedom, justice, unity, and equality that make us who we are,” Garcetti reportedly said. “Los Angeles joined the Naturalize NOW campaign because those principles are still worth fighting for — and to encourage eligible Angelenos and people across the country to seek a path toward citizenship and join the American family.”

According to the “Naturalize NOW!” website, the campaign to make 1 million new citizens (and presumably voters) is motivated in large part by a desire to shield the immigrant community from the policies of President Trump.

“At a time when xenophobic and anti-immigrant rhetoric has inundated the presidential campaign trail,” the group’s mission statement reads, “we must empower the immigrant community so that their voices may be heard at the polls.”

Mi Familia, one of the groups involved in the citizenship push, is quoted by the Examiner claiming it is halfway to the stated goal of 1 million new citizens.