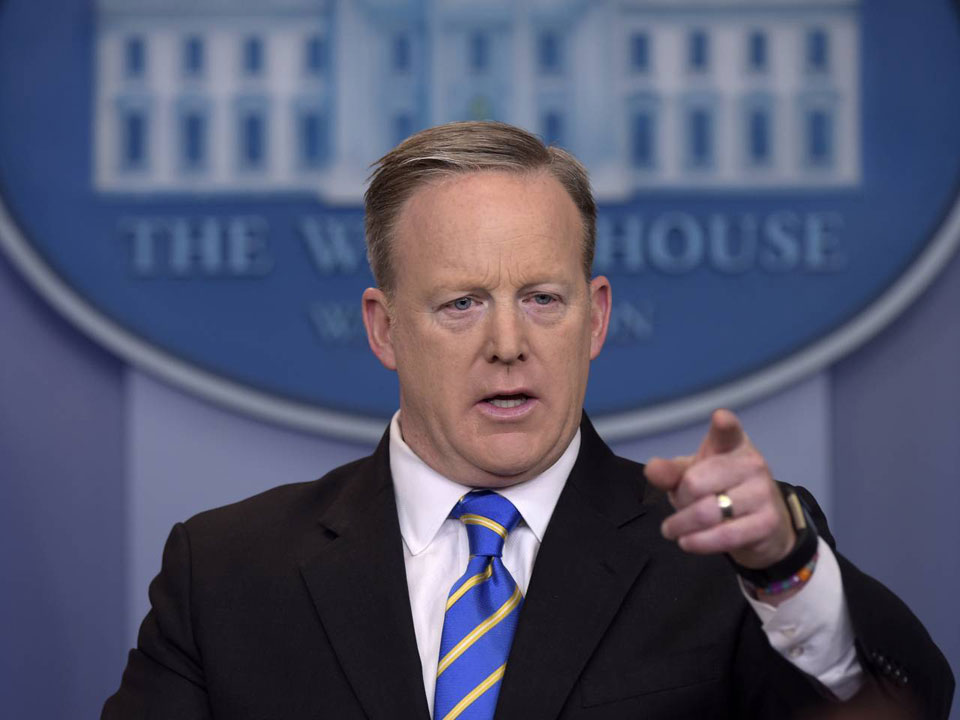 The Washington Post profiled perpetually yelling CNN White House reporter Jim Acosta for Monday’s paper under the headline “CNN’s Jim Acosta airs the news — and his irritation.” What stuck out most in media reporter Paul Farhi’s story was White House spokesman Sean Spicer letting Acosta have it, saying his grandstanding and overt editorializing is “hurting the profession.”

In an interview, Spicer denounced Acosta in some of the harshest terms a press secretary has used — at least in public — to refer to a reporter. “If Jim Acosta reported on Jim Acosta the way he reports on us, he’d say he hasn’t been very honest,” Spicer said. “I think he’s gone well beyond the role of reporter and steered into the role of advocate. He’s the prime example of a [reporter in a] competitive, YouTube, click-driven industry,” Spicer added. “He’s recognized that if you make a spectacle on the air then you’ll get more airtime and more clicks. . . . If I were a mainstream, veteran reporter, I’d be advocating for him to knock it off. It’s hurting the profession.”

This is actually what Farhi found, that Acosta’s over-the-top routine isn’t drawing standing ovations from colleagues:

A curious sidelight to all this has been the relatively tepid support Acosta has received from his fellow White House journalists. Only a few have publicly spoken out in support of him. There have been no walkouts or calls for boycotting the briefings (although Acosta has suggested “collective action” to get the cameras back). The White House Correspondents’ Association has confined its agitation to behind-the-scenes negotiations with Spicer and several short, general statements.

But from CNN Washington bureau chief Sam Feist, Farhi drew the usual risible line that there’s nothing new or partisan in Acosta’s routine. He’s just like Sam Donaldson, which is an insult to Sam Donaldson:

Feist likens Acosta to Sam Donaldson, the legendarily feisty former ABC newsman, and makes no excuses for Acosta’s pointed comments. “Jim is as tenacious now with Donald Trump as president as he was when Barack Obama was president,” Feist said. “If you look at the reporting he did in the Obama White House, you’ll find he’s the same Jim Acosta.”

Acosta struck a similarly silly pose: “This is not a crusade,” he said. “This is not partisan. This is journalism. We’re trying to hold them to account.”

The first, obvious difference between Acosta and Donaldson is that while Donaldson was loud and challenging, he had more of a sense of humor about himself. Even in their own video that accompanies the Farhi story, Post media writer Callum Borchers noted how warmly Reagan press secretary Marlin Fitzwater spoke of Donaldson, showing there was much less of a “war on the press” template.

But they are similar in that both were much tougher on Republican presidents, despite their denials. Farhi tried to summon examples that showed Acosta was tough on Obama. But it’s obvious that no one remembers any epic screaming matches with Barack Obama that disturbed that president’s alleged cool. Acosta never called those news conferences “fake.”

We reported him asking Obama about getting ISIS: “I guess the question is – if you’ll forgive the language – why can’t we take out these bastards?” That’s editorializing, and sort of nonpartisan. We noted he asked Susan Rice about bizarrely suggesting deserter Bowe Bergdahl served with “honor and distinction.” But he politely asked “Did you misspeak?”

But the best rebuttal of CNN comes from June 30, 2015, when Acosta very politely asked Obama about his “best week ever”.

TEDDY BEAR ACOSTA: I wanted to ask you about what some people are calling ‘your best week ever’ last week. You had two Supreme Court decisions supportive of the Affordable Care Act and of gay rights. You also delivered a speech down in Charleston that was pretty warmly received. It seems that you’ve built up some political capital for the remaining months of your presidency. I’m curious, how you want to use it?

On April 1, 2014, Acosta gushed that “if ObamaCare were a patient, this would be a pretty miraculous recovery, when you consider…that disastrous rollout in October and November.” He called it “pretty big news over here at the White House. They’re reacting with a lot of glee and happiness, I can tell you.”

Acosta even celebrated Obama going around the media! “Those Web videos, like the one you just showed with Zach Galifianakis, attracted 30 million views in the last six weeks. And they had about 100 celebrities and athletes Tweeting out their support for ObamaCare. So, for all of those people out there who were…complaining that they didn’t go to through traditional media…this alternative media strategy did work, in many ways, for this White House.”