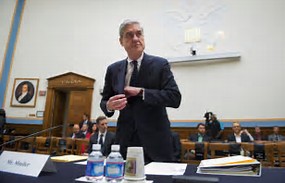 The news comes on the eve of Attorney General Jeff Sessions testifying before the Senate Intelligence Committe on the Russia investigation. This follows a hearing featuring the testimony of fired FBI director James Comey before the same body.

Mueller — who, on his appointment by Deputy Attorney General Rod Rosenstein, took independent control of the investigation into Russian involvement in the 2016 elections — had a shadow cast on his impartiality when Comey, a one-time mentee of Mueller’s who suceeded him at the Bureau, revealed under oath that he deliberately leaked a potentially privileged memo to the press specifically to ensure the appointment of a special counsel.

The ploy worked. Rosenstein, who was handling the investigation because Sessions had already recused himself based on his involvement in the 2016 Trump presidential campaign, came under immense political pressure to appoint a special counsel. Mueller was quickly applauded as an impartial choice by voices across the political spectrum.

Since his appointment, he has made signals as to the criminal nature of his investigation, hiring Andrew Weissmann, the former head of the DOJ criminal division’s fraud section, and former Deputy Solicitor General Michael Dreeben.

A more controversial pick of Mueller’s was former prosecutor and WilmerHale partner Jeannie Rhee. In 2015, according to Politico, she performed work for the Clinton Foundation, defending it from FOIA requests related to Hillary Clinton’s private email server.

These developments have raised some red flags on the right. For example, Former House Speaker Newt Gingrich told Fox News, “This is going to be a witch hunt.”

Joining the chorus was Americans for Limited Government President Rick Manning, suggesting Mueller’s role should be curtailed if not eliminated. In a prepared statement, he wrote:

Given former FBI Director James Comey’s testimony that there is no collusion between President Trump and Russia to do with the campaign, the scope of Special Counsel Robert Mueller’s investigation should be dramatically narrowed by Attorney General Jeff Sessions to simply the leaks and the Obama administration unmaskings to led to this witch hunt in the first place. If Mueller refuses to investigate these leaks, which are one of the central reasons he was even appointed as Special Counsel, then the Special Counsel should be discontinued. It is not up to the Justice Department to choose who the President of the United States is. The American people already made that decision in 2016.