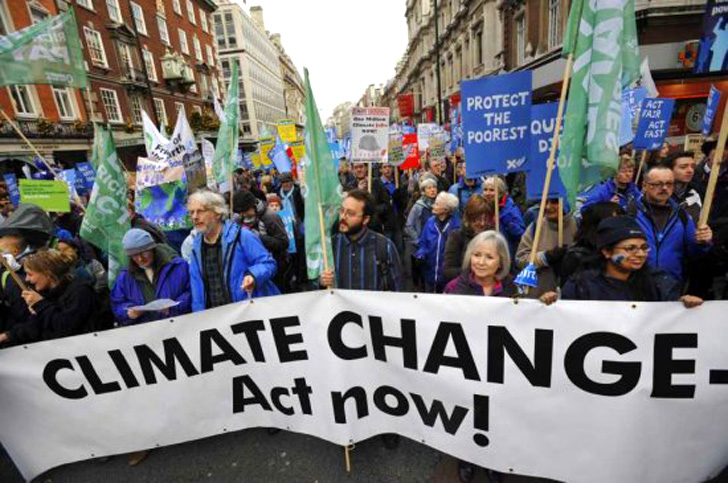 The ‘Pause’ in global warming is real and the computer models predicting dramatically increased temperatures have failed.

This is the shocking admission of a paper published this week in Nature Geoscience. It’s shocking because the paper’s lead author is none other than Ben Santer – one of the more vociferous and energetic alarmists exposed in the Climategate emails.

According to the paper’s abstract:

In the early twenty-first century, satellite-derived tropospheric warming trends were generally smaller than trends estimated from a large multi-model ensemble.

We conclude that model overestimation of tropospheric warming in the early twenty-first century is partly due to systematic deficiencies in some of the post-2000 external forcings used in the model simulations.

Translation: the real-world temperature increases were much smaller than our spiffy, expensive computer models predicted.
Its significance did not pass unnoticed by this veteran climate scientist:

His surprise is understandable given that, previously, alarmist scientists like Ben Santer have gone to great lengths to deny the existence of a ‘Pause’ in global warming, to pour scorn on those who have argued otherwise and to insist that their computer models are fundamentally reliable.

Indeed, only last week the Spectator published an article by one such Pause Denier – a scientist from the University of East Anglia (ground zero of the Climategate scandal), fondly known as the University of Easy Access, named Phil Williamson.
It is titled The Great Myth of the Global Warming Pause and it claims, somewhat imaginatively:

The Paris agreement will be the future, whereas the so-called global-warming hiatus is already history.

And let’s not forget that in the dog days of the Obama administration, alarmist scientists were so desperate to pooh pooh the “Pause” in the run up to the Paris climate talks that they concocted a junk science paper – now the subject of a federal investigation – which used dodgy data to try to airbrush the Pause out of history.

Truly, as the Daily Caller notes, the alarmists’ flip-flopping on this subject has of late been remarkable. Do they believe in the ‘Pause’ (or ‘hiatus’ as they sometimes term it) or don’t they?

Santer recently co-authored a separate paper that purported to debunk statements EPA Administrator Scott Pruitt made that global warming had “leveled off.” But Santer’s paper only evaluated a selectively-edited and out-of-context portion of Pruitt’s statement by removing the term “hiatus.”

Moreover, climate scientists mocked Texas Republican Sen. Ted Cruz for talking about the global warming “hiatus” during a 2015 congressional hearing. Instead, activist scientists worked hard to airbrush the global warming slowdown from data records and advance media claim that it was a “myth.”

Santer and Carl Mears, who operate the Remote Sensing System satellite temperature dataset, authored a lengthy blog post in 2016 critical of Cruz’s contention there was an 18-year “hiatus” in warming that climate models didn’t predict.

The fact that Ben Santer is involved in this embarrassing retraction – his admission on the Pause is bad enough, but what the paper says about the unreliability of the computer models is breathtaking in its implications – will be particularly piquant to those who remember his prominent role in the Climategate emails.

Santer revealed himself to be one of the nastier and more aggressive members of Michael Mann’s “Hockey” team when he emailed one of his colleagues:

Next time I see Pat Michaels at a scientific meeting, I’ll be tempted to beat the crap out of him. Very tempted.

(Climatologist Pat Michaels, now of the Cato Institute, incurred Santer’s wrath by being one of the first climate scientists to pour cold water on Catastrophic Anthropogenic Global Warming theory. In other words, Michaels made the disgusting, punishment-worthy error of using actual science and being right).

But perhaps Santer’s lowest point was the occasion where he effectively hijacked one of the early IPCC Assessment Reports and ramped up the scaremongering in a way that had rather more to do with political activism than it did to science.

I describe it in my book Watermelons:

Ben who? Well quite. Unless his name rings a bell as the guy from the Climategate emails who wanted to “beat the crap out of” climate sceptic Pat Michaels, you almost certainly won’t have heard of him. Yet in the mid-90s this climate modeling nonenity was somehow placed in the extraordinary position of being able to dictate world opinion on global warming at the stroke of a pen.

He achieved this in his role as “lead author” of Chapter 8 of the scientific working group report on the IPCC’s Second Assessment Report (SAR). Nothing to write home about there, you might think, except that Santer was personally responsible for by far the most widely reported sentence in the entire report: the one from the Summary for Policy Makers (the only part of the IPCC’s Assessment Report most people actually bother to read) claiming “the balance of evidence suggests that there is a discernible human influence on global climate.”

But was this line actually true? Was this really a fair summary – the kind of summary the IPCC purports rigorously and definitively to give of us – of the general state of scientific understanding at that particular moment? Er, well not according to some of the scientists who’d contributed to that chapter of the report, no.

The original version of the chapter – as agreed on and signed off by all 28 contributing authors – expressed considerably more doubt about AGW than was indicated in Santer’s summary. It included these passages:

“None of the studies cited above has shown clear evidence that we can attribute the observed changes to the specific cause of increases in greenhouse gases.”

“No study to date has positively attributed all or part (of the climate change observed) to (man-made) causes.”

“Any claims of positive detection and attribution of significant climate change are likely to remain controversial until uncertainties in the total natural variability of the climate system are reduced.”

“When will an anthropogenic climate be identified? It is not surprising that the best answer to the question is “We do not know.”

Strangely, none of these passages made it to the final draft. They were among 15 deleted after the event by Santer, who also inserted a phrase entirely of his own to the effect that “the body of statistical evidence” now “points to a discernible human influence on climate.” In other words the chapter did not represent the “consensus” position reached by 28 scientists. What it in fact represented was the scientifically unsupported opinion of one man, Benjamin D Santer.

We climate rationalists do still get an awful lot of stick from the alarmists for our old fashioned belief that scientists should stick to the evidence and use actual data rather than plucking stuff from thin air based on their fanciful notions of what ought to be true or what might get them more grant-funding.

How delightful it is to have it confirmed – albeit in the arid language of a science paper – that yet again are 100 percent correct.