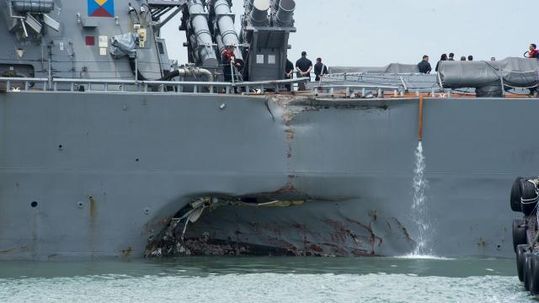 The USS John McCain, a destroyer warship equipped with guided missiles, collided with an oil tanker off the coast of Singapore early Monday morning, the U.S. Navy confirmed.
“Search and rescue efforts are underway in coordination with local authorities,” the Navy said in a statement. “In addition to tug boats out of Singapore, the Republic of Singapore Navy ship RSS Gallant (97), RSN helicopters and Police Coast Guard vessel Basking Shark (55) are currently in the area to render assistance.”

The extent of damage and personal injuries is still being investigated, the Navy added. But 10 sailors have been reported missing and at least five are injured.

The ship the USS John McCain collided with is a 30,000-ton, 600-foot-long oil tanker flying a Liberian flag, reported the Guardian.

The USS John McCain is 505 feet long and displaces about 9,000 tons, according to CNN.

Sen. John McCain (R-Ariz.), whose the namesake of the warship, acknowledged the incident on Twitter.

“Cindy & I are keeping America’s sailors aboard the USS John S McCain in our prayers tonight – appreciate the work of search & rescue crews,” he wrote.

The collision marks the second time in two months a U.S. warship has collided with another ship in the Pacific Ocean near the Asian continent. In June, the USS Fitzgerald collided with a container ship near Japan, killing seven sailors on the ship’s crew.