Now, that reporting has been confirmed according to a statement coming directly from Lt. Governor Fairfax’s office.

The statement, which calls the allegation “false,” reveals that the woman making the allegation had reached out to the Washington Post “more than a year ago.”  But, according to the statement, the Post let the story die in darkness, choosing not to publish the story after a “months” long investigation. 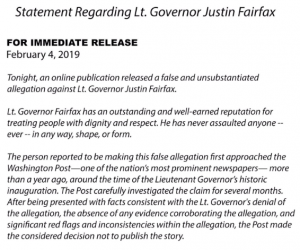 This is the same Washington Post which spoke to Supreme Court Justice Brett Kavanaugh’s accuser, Christine Blasey Ford, publicly for the first time, and later followed up by publishing a column supporting the idea of “believing survivors,” saying that, “We believe women’s stories should be heard.”