First reported by Far Left Watch, a Twitter user who is followed by both Twitter CEO Jack Dorsey and the Southern Poverty Law Center’s “Hate Watch” has called for violence in the streets in the event that the precedent legalizing abortion is overturned.

Suppose after these allegations Kavanaugh gets confirmed, and suppose he overturns Roe v Wade, y’all gonna be down for a violent general strike then or nah,” asked Emily Gorcenski. 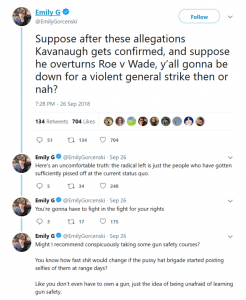 Gorcenski, who has 32,000 followers and is verified by Twitter, bills herself as a Data Scientist. She has a blog which has no active posts from 2018.

“Emily is an outspoken proponent of antifa and their often violent tactics. She claims to be an anarchist but also appears to be at least somewhat sympathetic to authoritarian ideologies like Communism. […]