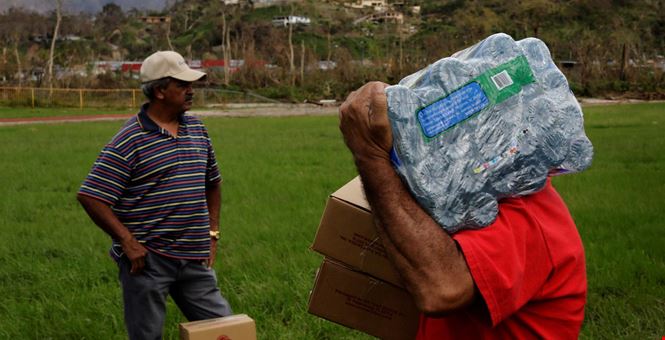 It’s been a month since Hurricane Maria ravaged the island of Puerto Rico. While supplies and aid are flowing, reports on the ground have noted the chronic issue with delivering water to the residents. Also, contrary to popular belief, the Trump administration did take anticipatory actions, as noted by Bloomberg. Moreover, even Gov. Ricardo Rosselló, a Democrat, said that he’s been in contact with the Trump administration, and that resources have been made available to the island.

Bloomberg’s Tobin Harshaw interviewed retired Navy Captain Jerry Hendrix, who mentioned that the light amphibious carriers and ships were put to sea ahead of the hurricane, something that’s not getting it’s fair share of media attention. He also said that logistically Puerto Rico isn’t necessarily right next door to the U.S. mainland. It takes time to get there. Also, the island’s infrastructure was poor and its power grid outdated. Surely, there could be room for improvement regarding aid relief, but did Trump drop the ball? No. Even Puerto Rican Delegate Jenniffer Gonzalez-Colon said,“I will tell you that everything that the president said that he was going to send to the island, it’s getting there. The resources are there. The help is there.”

Still, the distribution of water is an issue, which the PBS NewsHour highlighted. CBS News’ David Begnaud said that the island is still in emergency mode and not moving towards recovery regarding aid distribution. Moreover, we seem to have aid being wasted. Puerto Rican Secretary of State, Luis Rivera Marin, was caught in a NBC broadcast standing in a dumpster filled with disaster relief.

Marin said when he saw those relief packages in the dumpster crawling with rats enraged him. Supplies are still rolling in, but Begnaud said that bad roads and destroyed homes have prevented drivers from efficiently delivering the goods:

So, the shipping containers you’re talking about, about 3,000 sitting in the Port of San Juan, have been moved out, not all of them, but a majority of them.

And they were intended for grocery stores around the island. Right? So, those were private companies that had brought in these shipping containers, paid for the supplies, but couldn’t move them because their truck drivers were either at home, because the home had been destroyed, or the road was impassable.

More and more supplies are getting out. But let me tell you, the grocery stores around the island, they have a lot of nonperishables, Pringles, candy, cookies, all on the shelf.

But when you go to the meat section, it’s nearly 75 percent empty at the stores we have been to, the produce section 90 percent empty. And finding bottled water there is almost like playing a game.