“Rise and Resist” is an organization closely allied with another organization called “Gays Against Guns.” Jay W. Walker, wearing the pink shorts above, was interviewed with Patricia Okoumou by a gushing Joy Reid of MSNBC (see interview below). Jay Walker is also a “leader” of “Refuse Fascism,” a front group for an organization called the “Revolutionary Communist Party.” Incidentally, Refuse Fascism was initiated by a group of comrades which included Obama’s buddy Bill Ayers and radical professor Cornel West. 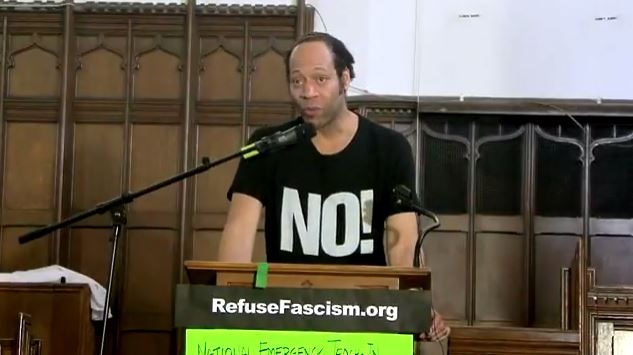 One of the more ridiculous articles was penned by Conor Friedersdorf of The Atlantic, who compared Patricia Okoumou to America’s founding fathers and called for charges to be dropped against her.

“Characterizing her expressive protest, Okoumou borrowed Michelle Obama’s bygone phrase, telling reporters Thursday, ‘When they go low, we go high.’ I went as high as I could.’ Right or wrong, she embodied the values of the place where she climbed, momentarily drawing the nation’s attention as if to a lit torch held high. A naturalized citizen who immigrated here from the Congo, she appears to be an exemplary fit for ‘the land of the free and the home of the brave.’”

The group “Rise and Resist” was created because initial founders were “astounded by the results of the 2016 presidential election” and so they formed “Rise and Resist” in order to “oust” President Trump among other vague communist-y objectives such as “equality” and “a wide variety of social justice issues.”

Notably, Rise and Resist has teamed with the exceptionally radical and euphemistically-named “Democratic Socialists of America” for trainings like “Birddogging for Single Payer” and “Nonviolent Civil Disobedience Training.” The latter “training” was held at New York University’s Vanderbilt Hall. This author has a feeling NYU would not be cool with hosting a tea party meeting.

Rise and Resist has also held several rallies for uber “progressive candidates” such as Zellnor Myrie, Jessica Ramos, and Alessandra Biaggi just to name a few. Their candidates preferences are very specific – they are selecting radical progressives to oust democrats from New York’s Independent Democratic Conference (IDC), which they perceive as being too willing to work with Republicans.