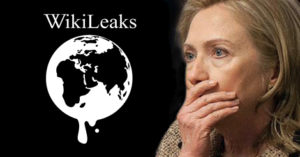 Wikileaks hit back hard Late Saturday night after The New York Times rolled out yet another hit piece titled, “Republican Attacks on Mueller and F.B.I. Open New Rift in GOP”.

The New York Times is a mouthpiece for Deep State operatives.

Wikileaks revealed in a midnight tweet late Saturday into Sunday that a New York Times reporter used to email the State Department giving them updates on stories they would be running several days in advance.

Hillary Clinton was Secretary of State at the time. This would give her State Department enough to time to distract or put a spin on the new revelations.

Email shows New York Times handed over Cablegate's publication schedule to the US government (without telling @WikiLeaks) giving the State Department, then headed by Hillary Clinton, up to 9 days in advance to spin the revelations or create diversions. https://t.co/IMrDOwoCd2 pic.twitter.com/CT4XkEs8Mc