On Friday Donald Trump Jr. mocked dimwitted Socialist Alexandrea Ocasio-Cortez on Instagram with a popular meme that is going around social media.

Ocasio-Cortez: Why are you so afraid of a socialist economy?
President Trump: Because Americans want to walk their dogs, not eat them. 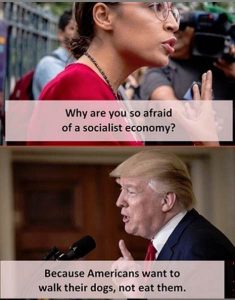 Of course, it’s pretty funny because it its true.

In response Ocasio-Cortez threatened to harass and abuse Don Jr. with a subpoena to testify before Congress. 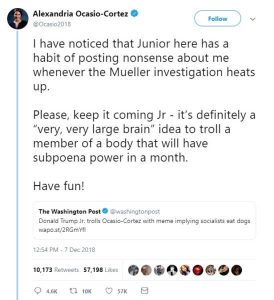 Ocasio-Cortez then doubled-down on her threat!

For the GOP crying that this is a “threat” – I don’t have power to subpoena anybody.

Congress as a body, GOP included, has the power. No indiv. member can issue a subpoena unless they are a Chair (which, as a freshman, I can assure you I will not be). Also must be under purview.

Alexandria Ocasio-Cortez ought to do well as a Democrat lawmaker– Dumb as a rock, thin-skinned and a complete thug.

Someone should tell her you’re not supposed to use the power of the government to avenge those who mock you.