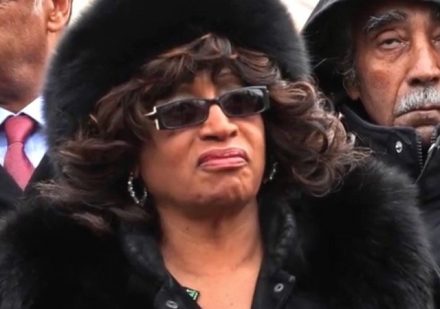 What kind of bird doesn’t fly? A jailbird!

According to the Tampa Bay Times, she and her co-conspirators had steered hundreds of thousands of dollars into a phony non-profit charity known as the One Door for Education Foundation and subsequently used the money to live the high life:

Federal prosecutors said the three used One Door to bring in more than $800,000 between 2012 and 2016, including a high-profile golf tournament at TPC Sawgrass. The Virginia-based One Door only gave out one scholarship for $1,200 to an unidentified person in Florida, according to court documents.

Simmons told jurors that his boss ordered him to take cash and checks from One Door’s account on dozens of occasions and deposit the money into Brown’s personal account.

And now, thanks to the existence of some real justice, this Maxine Waters-lookalike will get to spend the next five years in a dingy Florida state prison cell.

“This was a crime born out of entitlement and greed committed to ensure a lifestyle that was beyond their means,” said U.S. District Judge Timothy Corrigan. “Just think of the good that could have been done with that money if it would have been used for its intended purpose.”

Here’s the catch: The Florida Times-Union noted that “Corrigan ordered Brown to report to prison no earlier than Jan. 8 to an as-yet undetermined prison, but allowed her to remain free until then.”

Moreover, Corrigan even praised the criminal.

“This is a sad day for everyone,” he said, adding that Brown had used her position in Congress to achieve an “admirable record of service.” “I was impressed with all the outpouring of support for you, and I think it’s a tribute to all the work you’ve done over the years. That’s what makes this all the more tragic.”

Dude, kudos for sentencing her to prison, but did you also have to kiss her ass AND allow her to enjoy Christmas and New Year’s Day in freedom?

But hey, at least we know that she’ll DEFINITELY be behind bars by Jan. 8. In a world where Hillary Clinton gets to lie to the FBI but Michael Flynn doesn’t, this counts as justice.