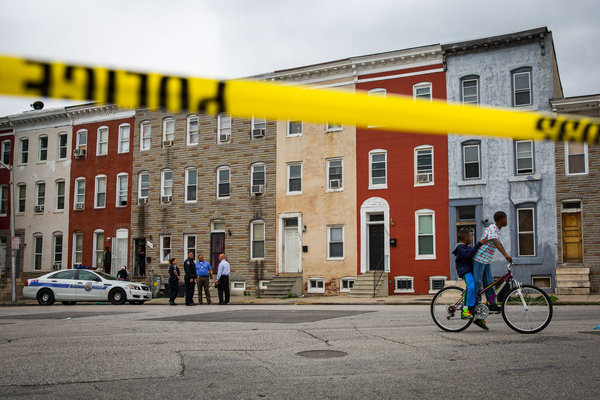 Mayor Stephanie Rawlings-Blake, gave the muggers and looters “space to destroy,” and then apologized for calling them thugs, defending them instead as “misguided young people” who “need support.”

Rawlings-Blake was a former City Council speaker who got a promotion when Sheila Dixon, the first black female mayor of Baltimore, was convicted of stealing gift cards intended for the poor. During her time in the City Council, Dixon had become notorious for waving her shoe at white colleagues and shouting, “You’ve been running things for the last 20 years. Now the shoe is on the other foot!”

The killings come as the city continues to struggle to curb violence. Baltimore saw the highest number of killings per capita in 2017, with 343 homicides.

Two killings in the first day of 2018 is impressive. But Baltimore has been breaking all sorts of horrible records.

Baltimore has set a new per-capita homicide record as gunmen killed for drugs, cash, payback – or no apparent reason at all.

The main reasons are the subject of endless interpretation. Some attribute the increase to more illegal guns, the fallout of the opioid epidemic, or systemic failures like unequal justice and a scarcity of decent opportunities for many citizens.

Others blame police, accusing them of taking a hands-off approach to fighting crime since six officers were charged in connection with the 2015 death of Freddie Gray, a black man whose fatal spinal cord injury in police custody triggered massive protests that year and the city’s worst riots in decades.

So how many more people have to die for Freddie Gray?