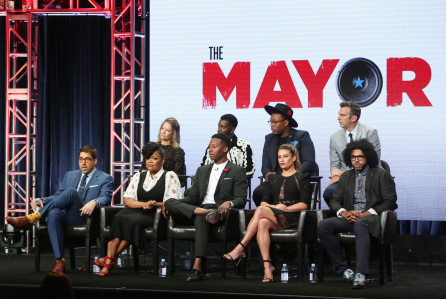 ABC’s latest series The Mayor follows an all-too familiar plot for people on both political sides. A political novice runs for office to self-promote his image. However, once he connects to the heart of what voters want in contrast to the phony candidates, he unexpectedly comes away with a victory. With a worthwhile plot that balances decent humor with heart, it just goes to show that even liberals can come to accept the Trump scenario. That is, if the scenario comes through a black man.

The October 3 pilot episode follows rapper Courtney Love (Brandon Michael Hall) and his friends pitch a mayoral campaign in his hometown of Fort Grey, California, to promote his developing album. Initially, everyone, including Courtney, doubts his efforts, with opposing campaign manager Valentina (Lea Michele) remarking in an on-the-nose jab, “Courtney Rose is a know-nothing egomaniac whose entire campaign is a stunt. Voters won’t fall for that. Not in America.” Still, after a debate where he promptly insults the lack of real action from past politicians, he comes away with a slight majority vote with “no Russia tampering,” making him the official mayor for the next four years.

If you caught any subtle connection to the past election, you’re not alone. Entertainment Weekly refers to the pilot as a “liberal fantasy retelling of the Donald Trump story” asking, “What if the outsider politician was actually a cool, young black man who actually did want to help the community?” IndieWire notes the show as “functioning as an illustrated guide on ‘How to Govern’ for our current Cheeto-in-Chief.” Vulture also praises the pilot for offering “a flawed but magnetic political newbie who is everything Donald Trump is not.” We get it, pundits. Cool but inexperienced black guy equals good. Wealthy white business man equals bad. We’re the stupid ones for not learning that after eight years of President Obama.

To be fair, the people behind the show insist that the idea was pitched well before the election. Unfortunately, with nearly every show being put through a post-election lens, a pilot about anything political was never going to escape the comparison. Far be it from us to expect one evening without a political lecture.

And that’s honestly a shame. Despite the reviews, the show remains relatively inoffensive and surprisingly non-cynical in these highly charged times. Looking away from comparisons to Donald Trump (if that’s possible for liberals anymore), there can be an enjoyable show that provides interesting characters and an optimistic flair, something people of all creeds can appreciate at the end of the day.