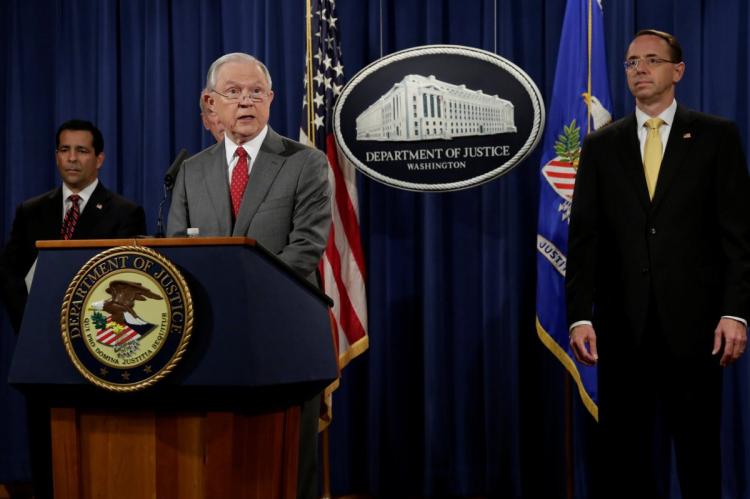 “First, let me say I strongly agree with the president and condemn in the strongest terms the staggering number of leaks undermining the ability of our government to protect this country. Just yesterday, we saw reports in the media about conversations the president had with foreign leaders,” Sessions said.

“No one is entitled to surreptitiously fight their battles in the media by revealing sensitive government information. No government can be effective when its leaders cannot discuss sensitive matters in confidence or to talk freely in confidence with foreign leaders,” he added.

Sessions was referring to transcripts of the president’s conversations with Mexican President Enrique Peña Nieto and Australian Prime Minister Malcolm Turnbull, which were leaked to the Washington Post on Thursday.

Sessions said the number of referrals for investigating classified leaks to the DOJ from the intelligence community has “exploded.”

In the first six months of the Trump administration alone, the DOJ received “nearly as many criminal referrals involving unauthorized disclosures of classified information as we received in the last three years combined,” the attorney general noted.

The DOJ has tripled the number of “active leak investigations compared to the number pending at the end of the last administration,” he said. It has also charged four people with “unlawfully disclosing classified material or with concealing contacts with foreign intelligence officers.”

Sessions and Director of National Intelligence Dan Coats both head the National Insider Threat Task Force, which was established in 2011.

“Soon after I arrived here in February, I initiated a review of our leak investigations and prosecutions. I reviewed how these cases were being referred and handled and was concerned with what we found—too few referrals, too few investigations with insufficient resources dedicated to them. I concluded the unprecedented rise in leaks required a surge of additional support for more investigations and to speed up our existing investigations,” Sessions said.

The DOJ has “tripled the number of active leak investigations,” he said. “In response, the FBI has increased resources devoted to leak cases and created a new counterintelligence unit to manage these cases. Simultaneously, the department is reviewing policies that impact leak investigations.”

One of the policies the DOJ is reviewing is that involving media disclosures.

“I have listened to career investigators and prosecutors about how to most successfully investigate and prosecute these matters,” Sessions said. “At their suggestion, one of the things we are doing is reviewing policies affecting media subpoenas.

“We respect the important role that the press plays and will give them respect, but it is not unlimited. They cannot place lives at risk with impunity. We must balance their role with protecting our national security and the lives of those who serve in our intelligence community, the armed forces, and all law abiding Americans,” he said.