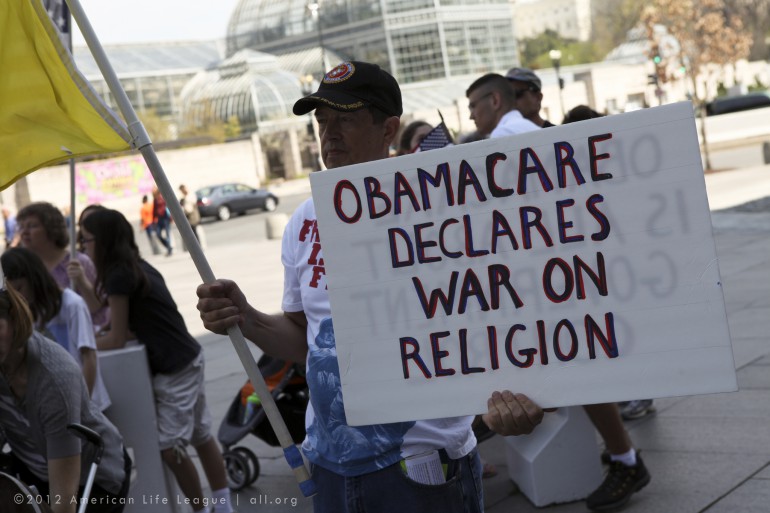 American atheist groups released statements suggesting that they are hopelessly confused after the Trump administration announced a birth control exemption for employee health insurance plans in cases when employers have sincere religious or moral objections to birth control.

The Secular Coalition for America, an aggressively anti-Christian lobbying group based in Washington, D.C., condemned the new birth control exemption by attempting to argue that allowing more religious freedom is in itself “a substantial burden to religious freedom.”

Religious people have no right to express their beliefs if such expression infringes on someone else’s right to use free or discount birth control, Secular Coalition spokesman Larry T. Decker said in a statement released on Friday.

“Preserving religious freedom does not mean expanding the right to impose beliefs on others,” Decker said. “It means ensuring that all Americans have the right to make medical decisions without interference from anyone else’s religious or moral beliefs.”

“This rule from Health and Human Services frames the contraception mandate as imposing a ‘substantial burden’ on employers,” Decker also said. “The private medical decisions made by an employee are not the business of their employer. The president’s action removes an imagined burden on employers and places a very real burden on women across the country.”

“No one’s medical decisions should be required to pass the scrutiny of their employer’s religious beliefs,” Decker declared.

The Secular Coalition also notes that a 2015 poll by the Public Religion Research Institute showed that 57 percent of Americans think corporations should give free birth control to their employees.

The First Amendment of the United States Constitution prohibits the federal government from making any laws prohibiting people from freely exercising religion.

Birth control is not mentioned at any point in the U.S. Constitution.

The guidelines instruct “federal agencies to give religious belief precedence over the law,” the atheist lobbying group charged.

The Freedom From Religion Foundation also released a pair of statements on Friday condemning the Trump administration’s policy of allowing religious people to oppose birth control.

“As it has for millennia, religion is being used to oppress women,” Freedom From Religion Foundation co-president Annie Laurie Gaylor said in one of the statements. “Employers have no business sticking their noses into intimate health decisions by women workers. It’s outrageous.”

The Freedom From Religion Foundation, which boasts about 24,000 members nationwide, is most famous for requesting that President Barack Obama offer official religious recognition for Americans who are not religious. The February 2016 request, made via a letter, insisted that it is time for an American president to “reach out to secular America” to address people who believe fiercely in abject cosmic nothingness.

Though they are very small, lobbying groups centered on atheism have tried to influence local and national politics in recent years.

The atheist groups have seen only limited success.

Starting in 2012, Obamacare required employers to provide insurance coverage for contraception at no cost to women. The requirement led to a number of lawsuits and, ultimately, two Supreme Court case.

Under the Trump administration’s new rule, employers with objections to the Obamacare requirement no longer have to follow the mandate and are not required to report this change to the federal government. Employers simply have to notify employees that they will stop providing contraceptive coverage.

Trump signed an executive order in April that ordered a number of federal agencies to find a solution to employers with conscience-based objections to the Obamacare provision. A host of churches, non-profits and schools have come out against the birth control measure since its inception, claiming it encroaches upon religious freedom.