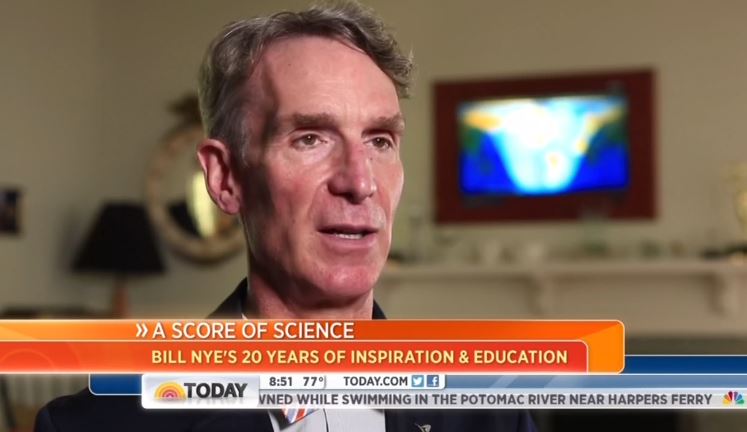 Bill Nye, a former standup comedian and host of a kiddie TV show, who once earned a BS in Mechanical Engineering, has finally been banished from speaking for “science”.

How does one speak for science anyway? How does one speak on behalf of a methodology of assembling knowledge? You know it’s scientism, not science, when “science” becomes something you represent, instead of do.

But anyway, which of Bill Nye’s crimes against science occasioned this rebuke from the lofty Tumblr blogs of Scientific American?

Was it the time he confused the Arctic and the Antarctic? The time he blamed whatever random weather event was in the news on Global Warming and blamed Jews for anti-Semitism? The whole Warming skeptics should die thing?

As scientists, we cannot stand by while Nye lends our community’s credibility to a man who would undermine the United States’ most prominent science agency.

I thought he already had a chat with Barack Obama.

And we cannot stand by while Nye uses his public persona as a science entertainer to support an administration that is expressly xenophobic, homophobic, misogynistic, racist, ableist, and anti-science.

Scientists are people, and in today’s society, it is impossible to separate science at major agencies like NASA from other pressing issues like racism, bigotry, and misogyny.

We can’t distinguish the measurements of planetary orbits from our petty politics. And our obsessive need to call everyone else names.

Bill Nye has chosen to excuse Rep. Bridenstine’s anti-science record and his stance on civil rights, and to implicitly support a stance that would diminish the agency’s work studying our own planet and its changing climate. Exploring other worlds and studying other planets, while dismissing the overwhelming scientific evidence of climate change and its damage to our own planet isn’t just dangerous, it’s foolish and self-defeating.

A science hater says what?