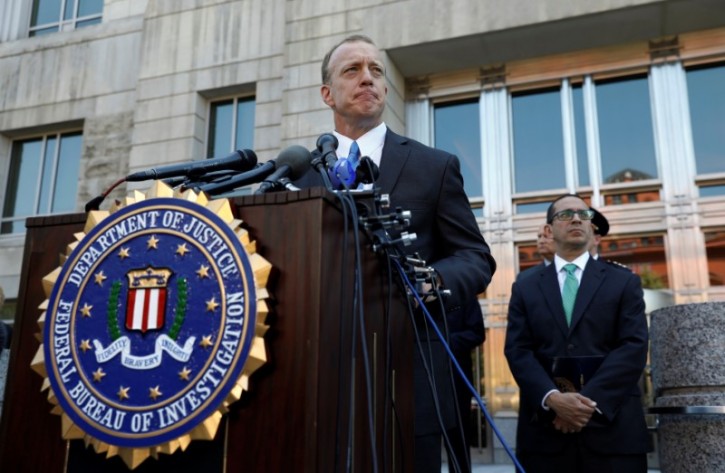 Totally baffling. This Associated Press write-up of yesterday’s FBI press conference makes clear that everyone involved agrees that deceased shooter James Hodgkinson detested Republicans with a fiery passion, yet investigators seem unwilling to call his attack premeditated or specifically targeted — nor will they comment on his motive at this point.  Why?  Am I missing something here?  This is what they’re telling us right now:

The gunman who shot a top House Republican and four other people on a Virginia baseball field didn’t have any concrete plans to inflict violence on the Republicans he loathed, FBI officials said Wednesday…They said he acted alone and had no connections to terror groups. But they said they had not yet clarified who, if anyone, he planned to target, or why, beyond his animus toward President Donald Trump and the Republicans he felt were ruining the country…“At this point in the investigation, it appears more spontaneous,” Slater said.  Hodgkinson had a piece of paper with the names of six members of Congress written on it, Slater said, but the note lacked any further context and there was no evidence from his computer, phone or other belongings that indicated he planned to target those officials…He also took pictures of the baseball field where he would later fire more than 60 shots. “The FBI does not believe that these photographs represented surveillance of intended targets,” the FBI said in a statement.

The quoted officials paint a picture of a down-on-his-luck vagrant whose marriage and personal finances were under strain — so who can say, really, if his unhinged attitudes about conservative leaders played any decisive role here?  The video of the press conference does not suggest that the AP distorted the content provided, with one special agent explicitly declining to speculate about “what [Hodgkinson] was thinking, or his motive.” Let’s consider some known, publicly-available facts:

(1) Mr. Hodgkinson hated Republicans with unusual ferocity, as evidenced by his letters to the editor and social media footprint.  The man belonged to a Facebook group called “Terminate the Republican Party,” for goodness sake.  The night before his spree, he conducted an internet search for a 2017 GOP convention.

(2) He was in possession of photographs he had taken of the ball field where Republicans held their practices, a loose description of which had been publicly reported.  I’ve been to that park.  It is not picturesque or a tourist attraction in any way. The FBI says it has determined that the pictures were not evidence of prior surveillance.  How and why?

(3) The would-be assassin had a list of six members of Congress’ names on his person at the time of the shooting, all of whom were reportedly Republicans, though the FBI has not confirmed that detail.  The note “lacked further context,” we’re told, so we ought not leap to any conclusions about the significance of those names.  Might his subsequent action of shooting at Republican members of Congress count as relevant context?

(4) Hodgkinson arrived at the scene of the attempted massacre with two guns, including a rifle, and a large supply of ammunition.  He was able to fire more than 60 shots.  That’s a lot of fire power for a “spontaneous” event. He’d rented a storage locker, at which he kept an even bigger cache of bullets.  He was also visited by police in Illinois when neighbors complained that he was conducting target practice in the woods near his home.  Shortly thereafter, he traveled to Washington, DC.

(5) Before starting the bloodletting, Hodgkinson inquired as to the partisan affiliation of the members of Congress practicing on the field.  After confirming that they were Republicans and not Democrats, he stuck around to open fire.

I am not a law enforcement professional, let alone a member of the US government’s foremost domestic investigatory agency.  But I am a rational human being with a functioning brain that is capable of synthesizing basic information.  For the life of me, I cannot understand how this fact pattern could possibly render FBI investigators unable or unwilling to state the obvious: This was a politically-motivated shooting that deliberately targeted members of the political party openly despised by the shooter.  The agent who briefed the media on Wednesday acknowledged Hodgkinson’s numerous online anti-Republican rants, but quickly added that they all appeared to be constitutionally-protected speech, in retrospect.  Okay, so what?  Nobody’s claiming that the guy should have been investigated or charged for his hateful diatribes.  But they do seem to highly relevant to determining his motive, no?  He went from banging out angry postings about GOP lawmakers to, you know, literally trying to kill GOP lawmakers.  His last-minute question about the targets’ party membership seems to erase any lingering doubt on this point, does it not?  There’s no reasonable doubt here.  The FBI’s hedging and hesitancy makes absolutely no sense to me.

Here’s what I don’t want to believe: I don’t want to believe that the FBI is so politicized that they’re reticent to clearly state what is directly in front of their noses, due to potentially uncomfortable partisan implications.  That explanation doesn’t really make much sense either, if you think about it: Even if the Bureau were totally in the tank for Democrats, what practical good would it do to downplay Hodgkinson’s unavoidable and already widely-disseminated political beliefs?  Everybody sees this for what it is, regardless of how law enforcement tries to soften the edges a week later.  My hope is that the FBI is acting out of an abundance of caution, as evidence is still being gathered and analyzed — and what they really meant yesterday was that they aren’t yet prepared to conclusively state various specifics with full certainty.  But that’s not how it felt. It felt like they were feigning inconclusive puzzlement about how or why this man chose those victims.  The “spontaneous” line (maybe they meant that he hadn’t mapped out every last detail of his atrocity in advance?) harkens back to another unfortunate episodes in which a nonsense government story was foisted upon the public for political reasons.  And the FBI’s ambiguity about the motive at play is reminiscent of the last US Attorney General musing that perhaps the motives of the Pulse nightclub terrorist would never truly be known — even as her department sought to censor 9-1-1 transcripts in which the perpetrator spelled out his pro-ISIS motives quite clearly.

The American people are in the midst of a crisis of confidence in our societal and governmental institutions, and the FBI has regrettably found itself at the epicenter of the partisan churn over the past year.  Whether it was the briefing agents’ intent or not, their press conference yesterday looked like a sanitized, deliberately obtuse performance that runs the risk of insulting Americans’ intelligence.  Caution is one thing, but this feels more like willful blindness.  Skirting around glaring truths does not help build public confidence in the FBI’s credibility and professionalism as an institution, even as most citizens — myself included — harbor great respect for both the Bureau’s workforce and the law enforcement community writ large.  Here’s hoping that we will get more clarity on these questions soon, especially if this is merely a miscommunication.

Parting thought:  The FBI says this matter is being pursued as an assault on members of Congress and federal officers. Why isn’t it being investigated as an act of terrorism?  The dictionary definition of terrorism is, “violence and threats to intimidate or coerce, especially for political purposes.”  Hodgkinson’s acts surely appear to fit that bill — as did the 2012 plot by another left-wing extremist who was convicted on domestic terrorism charges after his plan to massacre social conservatives was thwarted by a security guard.  Are the feds at least keeping the terrorism angle open as a possibility here?  If not, why not?