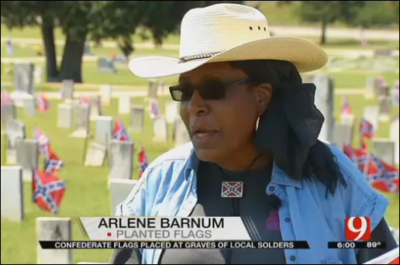 An Oklahoma woman is taking on the movement to remove Confederate monuments and symbols, one flag at a time.

Arlene Barnum, a black veteran, is touring cemeteries across the South to place Confederate flags on the grave sites of soldiers who died fighting for what they believed in, and she doesn’t plan on letting up any time soon, KWTV reports.

Before the Labor Day weekend Barnum made a stop at her local Rose Hill Cemetery in Ardmore, Oklahoma to pay homage to those who fought for the Confederacy and offered her thoughts on the current movement to erase that history.

“Most of the white people are afraid of being called racist. And I let them know that’s their personal problem, but I don’t have that issue,” Barnum said. “And I’m not going to tuck and run.”

Barnum placed about 120 Confederate flags along grave sites at the Ardmore cemetery to counter the national debate over Confederate symbols she believes only deepens racial division in America.

“They’re just trying to use the color of my skin to take down anything confederate,” she said.

The 63-year-old told KXII Ardmore is only the latest stop in her tour across the south to defend the honor of Confederate soldiers.

“Most men, they go out and buy guns and fishing gear, I spend mine on road trips,” she said. “I’ve traveled to every southern state below the Mason-Dixon line, with the exception of Virginia and Florida.”

Barnum has also raised $2,000 to restore a Confederate monument in Bryan County, where she’s currently in discussions with commissioners about the effort.

In the meantime, she’s doing what she can.

“If they do it (protest Confederate symbols) 24/7, we fly them 27/7,” she said. “They take one flag down, we put a bigger flag up. They take a monument down, you try and get the money to erect the monument back up.”

“The moment they start ratcheting up their attacks, then that’s when I don’t slow down, I got to speed it up,” she said.

Barnum said her efforts aren’t about racism, but rather simply honoring veterans who paid the ultimate price for their service.

“They were veterans,” Barnum told KXII. “They did what was commanded of them. They fought for what they believed in – whether it is right or wrong.”