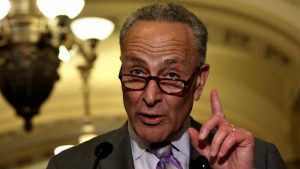 Affirmative action is still alive and well in the minds of the left. The most qualified candidate shouldn’t get the job, no, that’s preposterous!

Check out Senate Minority Leader Chuck Schumer’s response to voting for a Trump judicial nominee, who happens to be a white man…

As The Daily Caller reported on Thursday, Senate Minority Leader Chuck Schumer (D-NY) stated on Wednesday that he would not vote for a judicial nominee because of the color of his skin. The Trump nominee, Marvin Quattlebaum, is white. This, according to Schumer, is absolutely unacceptable. Schumer fumed:

The nomination of Marvin Quattlebaum speaks to the overall lack of diversity in President Trump’s selections for the federal judiciary. Quattlebaum replaces not one, but two scuttled Obama nominees who were African American. […]