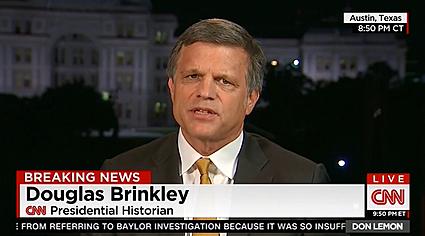 Following the revelations found in Donald Trump Jr.’s e-mails earlier in the week, the media have put greater focus on President Trump’s close-knit family. So late Wednesday night, during CNN Tonight, the network’s presidential historian Douglas Brinkley went on an angry rant where he railed against the Trumps as a family. And in addition, made baseless accusations about what White House staffers thought about them and their desire to work there.

Brinkley clearly had a bone to pick with the Trump family as he equated them to an Italian organized crime family. “You have a kind of– like a Mafioso; the family’s in charge only, and we keep it in our clan together,” he chided. “And some people find that honorable, but when it starts damaging the United States at home and abroad.”

In particular, Brinkley’s ire was directed at Trump’s son-in-law Jared Kushner, who he claimed had “the bull’s eye” of controversy on him. “I think he’s going to at the very least have to have his security clearance revoked. And I think he should step down. I don’t believe he’s trustworthy anymore,” he asserted. But his tirade against Kushner didn’t end there:

And having somebody like Jared Kushner over and over again mislead people, spending taxpayer’s money, people are trying to understand what’s going on about our election hacking and here is somebody; Kushner is supposed to be coming to negotiate peace in the Middle East according to Donald Trump when he’s taking meetings with rogue Russians in such a fashion.

He was also quite adamant in claiming that most people who worked in the White House didn’t want to be there. “But for White House staff this is just a disaster. I mean, people are going to want to start heading for the hills pretty soon,” he stated while citing no sources.

The closest thing to a source Brinkley got to was a fellow panelist, author William Cohan, who said: “I think Gary Cohn is looking to position himself to get away from the White House,” so he could become the chairman of the FED. Despite the fact that it was only Cohan’s opinion, host Don Lemon insisted it was a “very interesting bit of news.” But that’s speculation, and speculation is not news.

In response to Cohan’s unsupported claim, Brinkley rambled on about how he thought White House staffers were “embarrassed” to work there. “Well, I just think that there are a lot of people that are working for Donald Trump now that are almost embarrassed to have it on their resume, meaning they work for somebody who seems to be involved in scandal all time,” he pushed.

And when it came presidents with a lot of scandals, Brinkley declared that one needed to “go back to like Warren Harding and [the] early scandals of teapot dome.” He eventually would recall Nixon and Reagan, but no others. Of course, he would only recall Republicans and completely ignore any and all Democrats.

With that kind of disgusting mudslinging coming from a so-called presidential historian, it’s no wonder CNN’s credibility is in the gutter. It’s one thing to want historical context for current events, that’s important, but to have the historian smearing the family of a sitting president, that’s something far different and damaging to journalism.