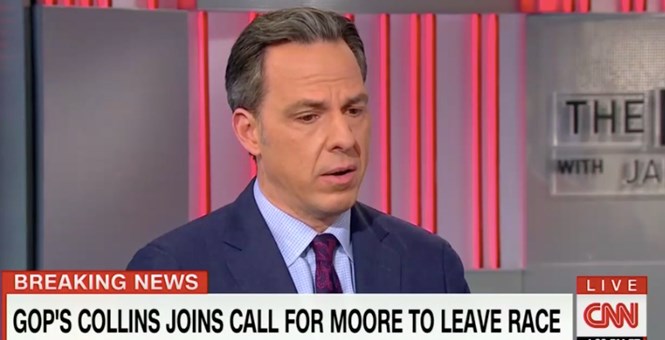 Guy has gone to report the numerous allegations against Alabama Senate Republican candidate Roy Moore. In days since the allegations that he has been inappropriate with teenage girls, the GOP leadership on the Hill have rescinded their support and started packing sandbags. Now, we have a woman, a Trump voter, who alleges that Moore sexually assaulted her when she was 16. Now, we have this story about Roy Moore being banned from a mall because he was cruising for high school dates. It’s a mess. It’s thrown the Alabama Senate race into chaos, though it’s still dubious whether a Democrat could actually win here, given the electorate—even with the allegations lobbed at Moore. We’ll see what happens. The special election isn’t for about another month.

Yet, CNN’s Jake Tapper did note something that is different between now and then, especially when women came forward to accuse Bill Clinton of sexual abuse. Those women were raked over the coals by the press. In a segment with Amanda Carpenter and Van Jones, Tapper admits that Bill’s accusers were treated terribly by the press. Newsbusters clipped the exchange [emphasis mine]:

JAKE TAPPER: You know something? And maybe it’s the southern accent that reminds me of this, but I think we are and we’ve seen — we’ve seen some of this in the press. There was a story in The Atlantic called “Bill Clinton: A Reckoning.” Chris Hayes said something the other day and other people have.

But the accusers of Bill Clinton back in the ’90s were never given the credence and treated with the same respect that these women are being treated and I think that there is something to be said about how society has evolved since then, but in addition, it’s hard not to look back at that period and think, you know what? The media treated those women poorly.

AMANDA CARPENTER: Yeah, without a doubt. You can’t rewrite history, but what I am concerned about now is that I see a lot of Republicans, people like Ann Coulter on Twitter, going back and bringing up people like Senator Kennedy, Clinton, other people that did have previous acts of sexual misconduct almost as a way of saying, well, they did it. We can, too. Appeals to hypocrisy do not work for a party that has no moral core and we do have a problem now because we have elected a President who has his own accusers. So we’re all going to go back through history and there is a lot of reckoning that needs to be done. I don’t know where that’s going to take us. It is risky because you may lose a Senate seat, but it is a problem for Republican voters because you keep putting these people up who are morally conflicted and now the choice is, well, you can vote for this pedophile or you can lose a seat and hand it to Democrats. The Republican Party has to do better. It has to do it with Republican leadership. I am happy to see Mitch McConnell step up and say he should be expelled. We needed more of that during the primary process.

The article Tapper cites from The Atlantic, Bill Clinton: A Reckoning, argues that it was time for feminists to come clean and admit they totally stepped on a rake defending Slick Willy:

Juanita Broaddrick reported that when she was a volunteer on one of his gubernatorial campaigns, she had arranged to meet him in a hotel coffee shop. At the last minute, he had changed the location to her room in the hotel, where she says he very violently raped her. She said that she fought against Clinton throughout a rape that left her bloodied. At a different Arkansas hotel, he caught sight of a minor state employee named Paula Jones, and, Jones said, he sent a couple of state troopers to invite her to his suite, where he exposed his penis to her and told her to kiss it. Kathleen Willey said that she met him in the Oval Office for personal and professional advice and that he groped her, rubbed his erect penis on her, and pushed her hand to his crotch.

It was a pattern of behavior; it included an alleged violent assault; the women involved had far more credible evidence than many of the most notorious accusations that have come to light in the past five weeks. But Clinton was not left to the swift and pitiless justice that today’s accused men have experienced. Rather, he was rescued by a surprising force: machine feminism. The movement had by then ossified into a partisan operation, and it was willing—eager—to let this friend of the sisterhood enjoy a little droit de seigneur.

The notorious 1998 New York Times op-ed by Gloria Steinem must surely stand as one of the most regretted public actions of her life. It slut-shamed, victim-blamed, and age-shamed; it urged compassion for and gratitude to the man the women accused. Moreover (never write an op-ed in a hurry; you’ll accidentally say what you really believe), it characterized contemporary feminism as a weaponized auxiliary of the Democratic Party.

The party was on the wrong side of history, and there are consequences for that. Yet expedience is not the only reason to make this public accounting. If it is possible for politics and moral behavior to coexist, then this grave wrong needs to be acknowledged. If Weinstein and Mark Halperin and Louis C. K. and all the rest can be held accountable, so can our former president and so can his party, which so many Americans so desperately need to rise again.