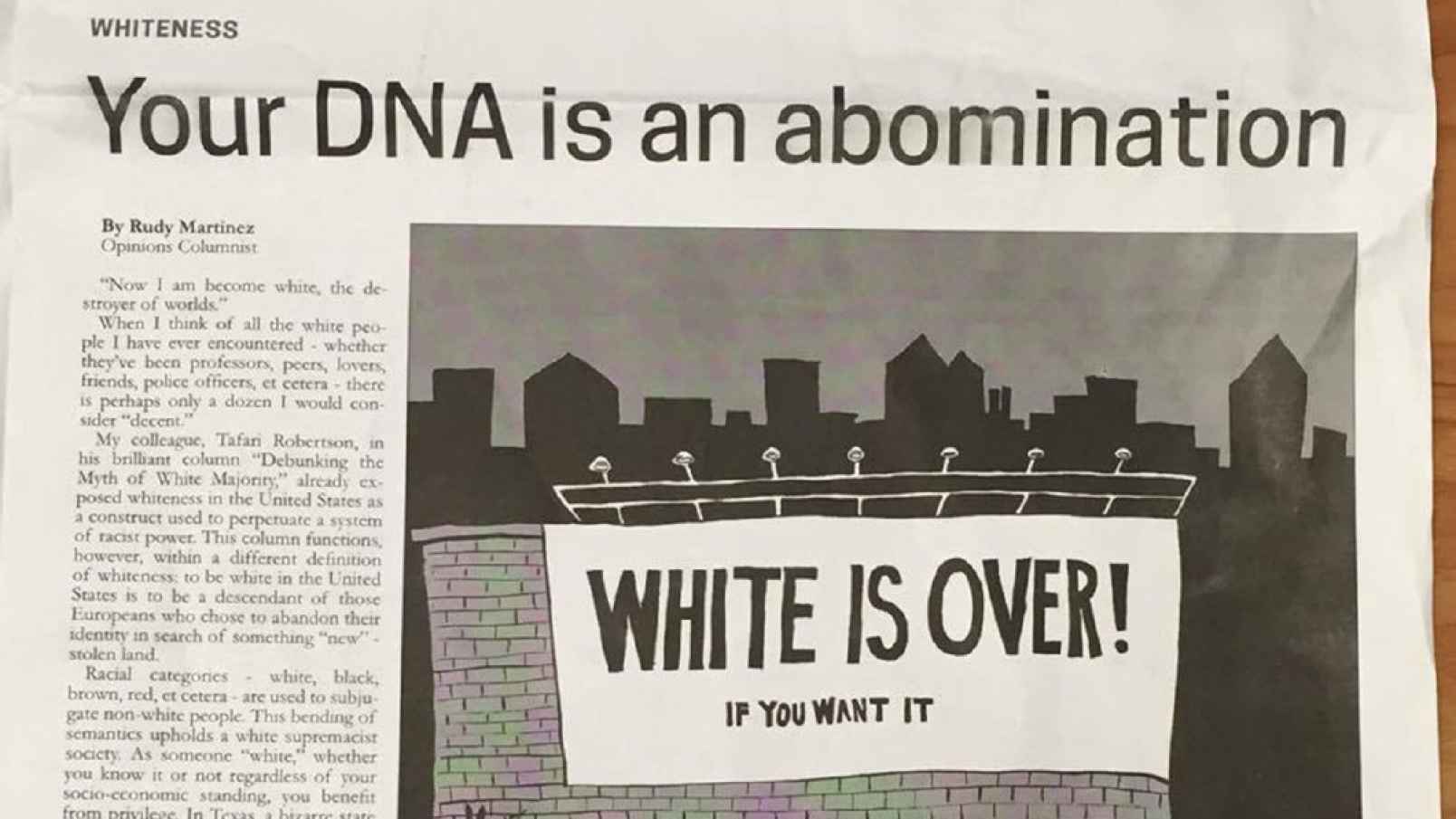 Intersectionality and the whole White Privilege movement are racist. Violently, hatefully racist. Not “reverse racist” or any other weasel words. Just racist.

A new opinion piece in a Texas State University student newspaper tells white students, “Your DNA is an Abomination.”

“When I think of all the white people I have ever encountered – whether they’ve been professors, peers, lovers, friend, police officers, et cetera – there is perhaps only a dozen I would consider ‘decent,’” student author Rudy Martinez writes in the University Star.

“I see white people as an aberration,” Martinez wrote in the paper.

“Remember this: I hate you because you shouldn’t exist,” he concludes. “You are both the dominant apparatus on the planet and the void in which all other cultures, upon meeting you, die.”

Martinez argued that “white death will mean liberation for all,” and that those who identify as white should “accept this death as the first step toward defining (themselves) as something other than the oppressor.”

The Texas State University campus newspaper, The University Star, issued an apology on Wednesday after it published an opinion column titled, “Your DNA is an abomination” which called for the death of “whiteness.”

The university’s president, Denise Trauth also issued a statement on the opinion piece calling it “racist.”

The paper isn’t calling it racist though. Just misunderstood.

“We acknowledge that the column could have been clearer in its message and that it has caused hurt within our campus community.”

I don’t know. “I hate you” and “white death will mean liberation for all” seem pretty clear.

Martinez claims he was “starting a conversation.”

“The article speaks for itself…Though my language, especially when I claim to have only ever met ‘12 decent white people,’ could be deemed as hyperbolic (just barely), it has accomplished its goal: starting a conversation and outing racists,” Martinez said.

Beginning with himself. And the paper’s editor who printed his racist ravings. #RestinPower

But like every racist, Martinez is blaming his unfamiliarity with the race he hates so much.

It’s a hilariously classic xenophobic response. Except that Martinez, as a good intersectional Nazi, doesn’t think he can be racist.